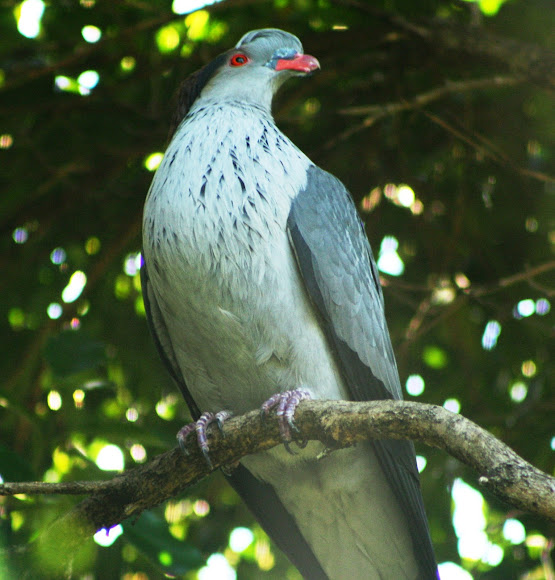 The birds are big, with length varying from 40 to 46 centimetres (16 to 18.4 inches). It has a pale grey breast, dark grey wings and a slaty-black tail with one light grey band. The beak is red-brown. The pigeon also has a flattened, wide and sweptback crest of feathers that commences at the beak to the nape of the neck. The crest consists of grey feathers at the front and brown-red feathers at the back. The juveniles are plainer in appearance with a brown bill. The tail band is less defined in the immature.

The Topknot Pigeon is generally found in groups that can number in the hundreds. They are strong fliers and are often spotted over rainforests and valleys but are also are found around palm trees, figs, eucalyptus forests and woodlands. They are completely arboreal. The birds tend to feed on fruits in the forest canopy and often rest on trees above the canopy. They gain water from raindrops from trees. They are occasionally found in open country seeking food. Birds can often be found from Cape York in Queensland to the South Coast of New South Wales near the coast but have been seen as south as Tasmania and the Gippsland Lakes in Victoria, depending on food availability.

A very difficult bird to photograph as they are often up very high & are very shy. I managed to get this one as there is a pair with a nest in a very low tree outside my window & they come down to eat the berries on the palms.

Thanks mac! I got very lucky with them nesting outside my window so low. I'd seen them for years but they never came down low enough for good photos. Hopefully I'll see their chicks soon!

I've managed to get some better shots & replace half the spotting photos. I can now also hear chicks in the nest! I will try & get some photos once they've left the nest.

Thanks Pradeep & Ali! Hopefully I can get some better shots when they come down closer!