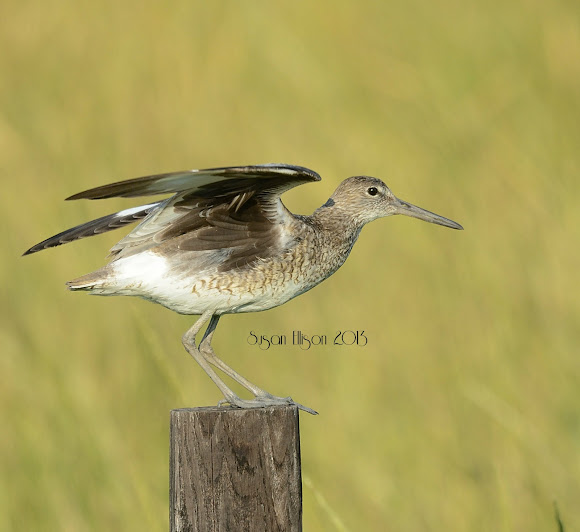 Note that this is an eastern willet which breeds here. Pink at the base of the bill and thicker bill at the base too. They will be leaving around a month from now. Marsh birds rather than beach birds. Some westerns drab looking, do summer but migrants will be arriving by the end of the month and molt almost immediately. Some young easterns will be around at the end of july but then they go too. The easterns molt after they migrate so you only see winter plumage on them on some new arrivals in March. Easterns are marsh willets and westerns are sand willets although both poach on the others territory. Easterns often are not territorial with westerns in winter plumage but have great contests with any other easterns that poach.

This bird is currently classified as a sister subspecies along with the western willet, T. s. inornatus. However, due to differences in size, physical proportions, plumage colour, voice, range and ecology, the eastern and western willets are likely to be elevated to separate species status in the future. Even though these two sister (sub)species are challenging to distinguish in the field, the pink at the base of the bill distinguishes eastern and western birds.(You should know that the pink base is not always present on eastern willets.) http://www.oceanwanderers.com/ONWillet.h...