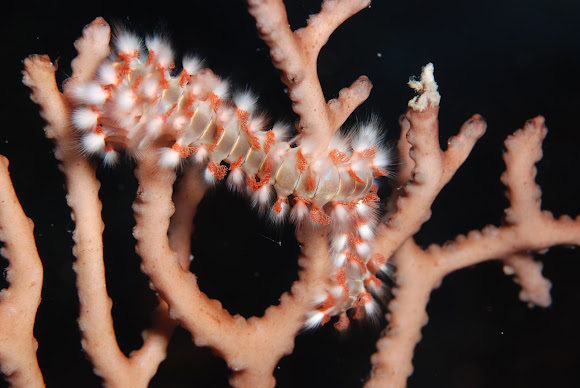 Class Polychaeta, the bristleworms, is the largest and most primitive group of annelids, and the majority are marine. They are often strikingly beautiful and very colorful and, unlike the other two groups of annelids (Classes Clitellata and Pogonophora), they show enormous variation in form and lifestyle. Apart from the head and terminal segments, all the segments are identical, each with a pair of flattened, fleshy lobelike paddles called parapodia, which are used for swimming, burrowing and creating a feeding current. The bristles, or chaetae, on the parapodia are immensely variable between species.

Feeding on the gorgonian coral off Cozumel, Mexico on the Carribean side at ~20m

These beautiful flattened segmented worms, reaching 35.6 cm (typically 7-10 cm) in length, with groups of white bristles along each side. The bristles are hollow, venom-filled chaeta which easily penetrate flesh and then break off if this worm is handled. They produce an intense burning irritation in the area of contact, hence the common name of the species. When disturbed, the worm flares out the bristles so they are more exposed.

Yes, they are just as amazingly varied and consisting of a wide range of species