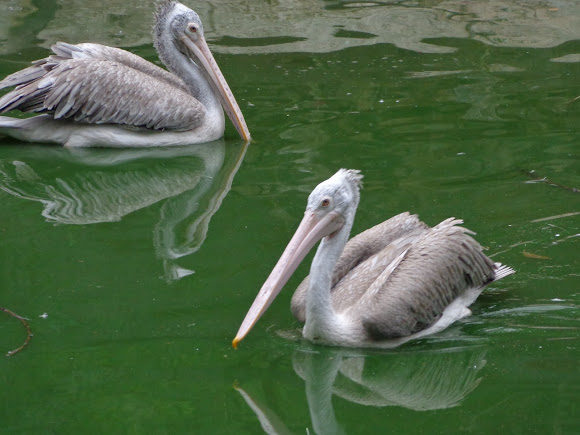 The Spot-billed Pelican or Grey Pelican (Pelecanus philippensis) is a member of the pelican family. It breeds in southern Asia from southern Pakistan across India east to Indonesia. It is a bird of large inland and coastal waters, especially large lakes. At a distance they are difficult to differentiate from other pelicans in the region although it is smaller but at close range the spots on the upper mandible, the lack of bright colours and the greyer plumage are distinctive. In some areas these birds nest in large colonies close to human habitations.The Spot-billed Pelican is a relatively small pelican but still a large bird. It is 125–152 cm (49–60 in) long and a weight of 4.1–6 kg (9-13.2 lbs). It is mainly white, with a grey crest, hindneck and a brownish tail. The feathers on the hind neck are curly and form a greyish nape crest. The pouch is pink to purplish and has large pale spots, and is also spotted on the sides of the upper mandible. The tip of the bill (or nail) is yellow to orange. In breeding plumage, the skin at the base of the beak is dark and the orbital patch is pink. In flight they look not unlike the Dalmatian Pelican but the tertials and inner secondaries are darker and a pale band runs along the greater coverts. The tail is rounder.[2] The newly hatched young are covered in white down. They then moult into a greyish speckled plumage. The spots on the bill appear only after a year. The full adult breeding plumage appears in their third year.[3]

The species is found to breed only in peninsular India, Sri Lanka and in Cambodia. A few birds from India are known to winter in the Gangetic plains but reports of its presence in many other parts of the region such as the Maldives, Pakistan and Bangladesh has been questioned.[2] The main habitat is in shallow lowland freshwaters. The Spot-billed Pelican is not migratory but are known to make local movements and are more widely distributed in the non-breeding season.

Thanks for the suggestion Sachin!!!