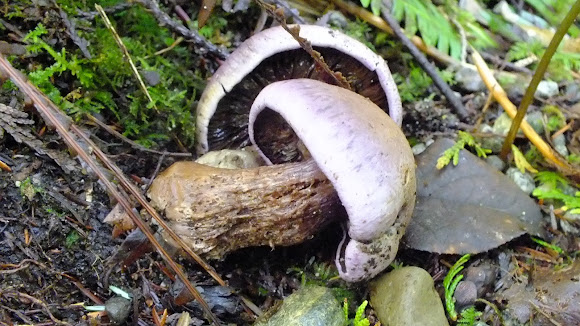 The cap of Cortinaris traganus typically is 4 to 11 cm in diameter, hemispherical with rounded top when young, expanding with age to convex and then low convex. The colour varies. In the most easily identified form of the species, the surface is vivid lilac but it can also be brown, whitish or ochre. The cap surface is dry and silky smooth or fibrillose, or in dry weather, cracked and scaly. The flesh is mottled orange-brown. Gills are moderately crowded, attached to the stem and sometimes notched. The colour starts out light brown and becomes darker rusty brown from maturing spores. The stem is 4 to11 cm long x 1 to 2 cm wide at the top, up to 3.5 cm wide at the base. Silvery or lilac fibrous remains of the universal veil cover the lower 3/4 of the stem's surface. The base of the stem develops brownish stains. Sliced open, the inner flesh is bright brown-yellow streaked, in contrast to the lilac colours of the outside of the mushroom. A lilac-coloured, thread-like cortina, the remains of a partial veil, covers the gills of young mushrooms. After the cap expands, remnants of the cortina may form a band around the top section of the stem, made visible by the rusty brown spores that get caught in its threads. Cottony remains of the universal veil form a layer of whitish or lilac fibrils that clothe the lower part of the stem and then form woolly, whitish or lilac-tinted rings around the stem.

Cortinarius traganus is a widespread species that is found in coniferous forests worldwide. It seems to prefer poorer soils, both siliceous and non-calcareous. It grows throughout the temperate zone of the northern hemisphere.