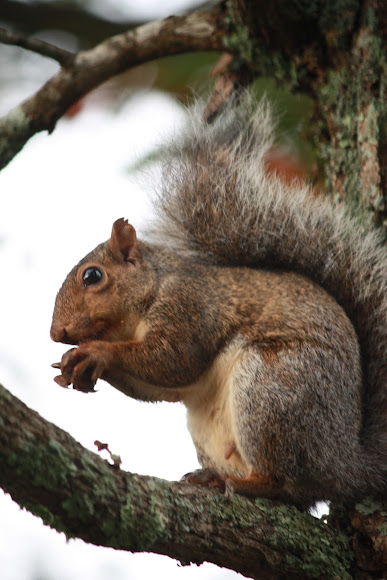 Eastern Gray Squirrels are the most frequently seen mammal in our area. They are members of the Rodent family, and spend most of their lives in trees. Eastern Gray Squirrels can grow 17 to 20 inches long. They have grayish-brown fur, except for their bellies, which have pale fur. The tail often has silvery-tipped hairs at the end. This animal does have a black phase, which means some of them are nearly all black; but these are not as common.

n the wild, eastern gray squirrels can be found inhabiting large areas of mature, dense woodland ecosystems, generally covering 40 hectares of land.[17] These forests usually contain large amounts of dense understory vegetation that provides them sufficient amount of food sources and favorable shelters. Oak-hickory hardwood forests are preferred over coniferous forests.[7] Eastern gray squirrels generally prefer constructing their dens upon large tree branches and within the hollow trunks of trees. They also have been known to take shelter within abandoned bird nests. The dens are usually lined with moss plants, thistledown, dried grass, and feathers. These perhaps provide and assist in the insulation of the den, used to reduce heat loss. A cover to the den is usually built afterwards.[citation needed] Close to human settlements, eastern gray squirrels are found in parks and back yards of houses within urban environments and in the farmlands of rural environments