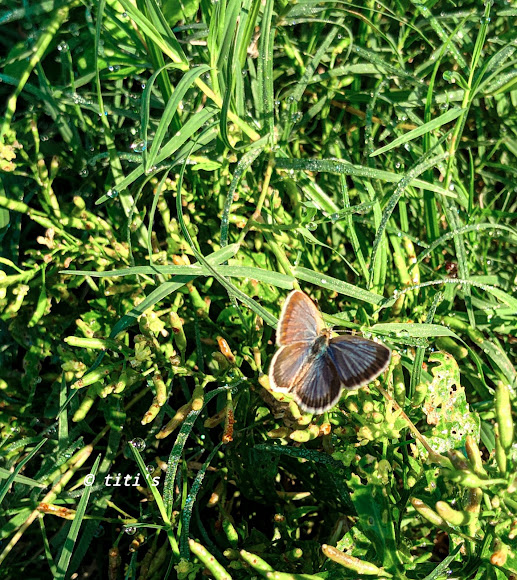 The small blue (Cupido minimus) is a Palearctic butterfly in the family Lycaenidae. Despite its common name, it is not particularly blue. The male has some bluish suffusion at the base of its upper wings but is mostly dark brown like the female. The species can live in colonies of up to several hundred and in its caterpillar stage is cannibalistic. Small blue males are dark brown with a scattering of bright blue scales that speckle their wings. Females lack this blue speckling. Both males and females exhibit the characteristic silver underside with black spots. The male has a bluish tint at the base of its wings similar to the upper side.Their wingspan can fall anywhere from 16-27mm, but males tend to be the smaller sex. Small blues are often confused with the female Osiris Blue, whose coloring is similar to that of the male small blue.

It is listed under the 41 species of principal importance under the Schedule 5 of the 1981 Wildlife and Countryside Act and the 1985 Northern Ireland Wildlife Order.