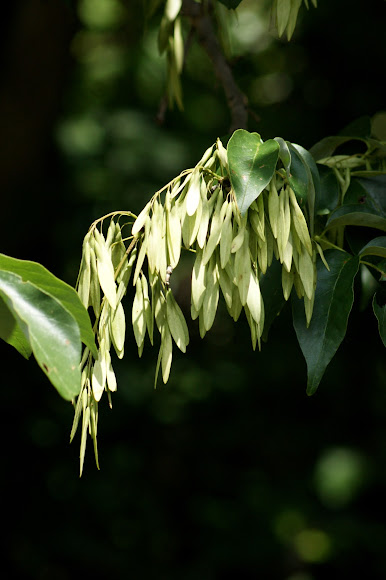 It is a medium-sized deciduous tree reaching 12-25 m (rarely to 45 m) tall with a trunk up to 60 cm in diameter. The bark is smooth and gray on young trees, becoming thick and fissured with age. The winter buds are reddish-brown, with a velvety texture. The leaves are 15-30 cm long, pinnately compound with seven to nine (occasionally five or eleven) leaflets, these 5–15 cm (rarely 18 cm) long and 1.2–9 cm broad, with serrated margins and short but distinct, downy petiolules a few millimeters long. They are green both above and below. The autumn color is golden-yellow, and the tree is usually the earliest to change color, sometimes being in autumn color as early as Labor Day. The flowers are produced in spring at the same time as the new leaves, in compact panicles; they are inconspicuous with no petals, and are wind-pollinated. The fruit is a samara 2.5-7.5 cm long comprising a single seed 1.5-3 cm long with an elongated apical wing 2-4 cm long and 3-7 mm broad.

Native to eastern and central North America, from Nova Scotia west to southeastern Alberta and eastern Colorado, south to northern Florida, and southwest to eastern Texas. Naturally a moist bottom land or stream bank tree, it is hardy to climatic extremes. This one was photographed in Edgefield County, SC.

Green Ash is one of the most widely planted ornamental trees throughout the United States and much of Canada but mostly Alberta, including in western areas where it is not native. Is also widely planted in Argentina. It is very popular due to its good form and resistance to disease. About 40% of boulevard trees in Edmonton, Alberta are Green Ash. Green Ash wood is similar in properties to White Ash wood, and is marketed together as "white ash". The commercial supply is mostly in the South. It is very popular, used in making electric guitars because it can be somewhat lighter than white ash without sacrificing too much in tone. It has a bright sound with long sustain, plus the wood grain is aesthetically desirable to many guitar players.