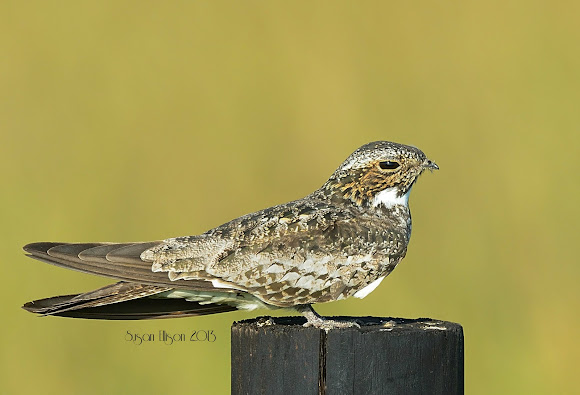 Common Nighthawks are medium-sized, slender birds with very long, pointed wings and medium-long tails. Only the small tip of the bill is usually visible, and this combined with the large eye and short neck gives the bird a big-headed look. Common Nighthawks are well camouflaged in gray, white, buff, and black. The long, dark wings have a striking white blaze about two-thirds of the way out to the tip. In flight, a V-shaped white throat patch contrasts with the rest of the bird’s mottled plumage

Common Nighthawks are most visible when they forage on the wing over open areas near woods or wetlands. They nest on the ground in open areas such as gravel bars, forest clearings, coastal sand dunes, or sparsely vegetated grasslands.

The Common Nighthawk’s impressive booming sounds during courtship dives, in combination with its erratic, bat-like flight, have earned it the colloquial name of “bullbat.” The name “nighthawk” itself is a bit of a misnomer, since the bird is neither strictly nocturnal—it’s active at dawn and dusk—nor closely related to hawks

thanks Marta....I love their jewel tone

I love these birds!