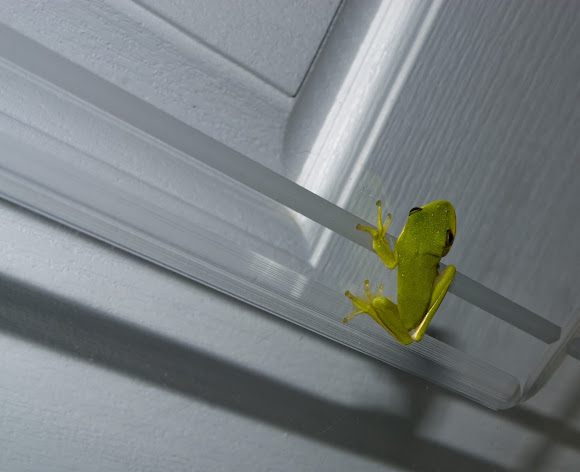 Green treefrogs are long-legged and smooth-skinned treefrogs. Most individuals have a bright yellow-green dorsum, but individuals that are reddish-brown to green are also common. Their dorsum frequently has small golden spots which overlay the green color. Ventrally, they are white to cream and have a similarly-colored prominent lateral stripe on each side. Total length ranges from 34 to 62 mm, females tend to be larger than males. (Pham, et al., 2007; Martof, et al., 1980)

Green treefrogs are frequently found in small ponds, large lakes, marshes, and streams. They prefer habitats with plentiful floating vegetation, grasses, and cattails. One study suggested that, in an artificial hardwood forest setting, the abundance of Hyla cinerea is related to the openness of the forest canopy. The study noted that 88% of 331 individuals were found in areas of the forest where the canopy was open. The presence of green treefrogs in the open canopy areas was interpreted as a method for finding prey, which concentrate in sunny areas with dense ground vegetation. (Horn, et al., 2004; Martof, et al., 1980)

It's nice to see them from the inside of the house, too. Always at the kitchen window in the summer-time, eating up the bugs, with their white stomachs pressed to the glass. And laughing at their antics while you wash up the supper dishes with family and friends. Thanks for the memory.