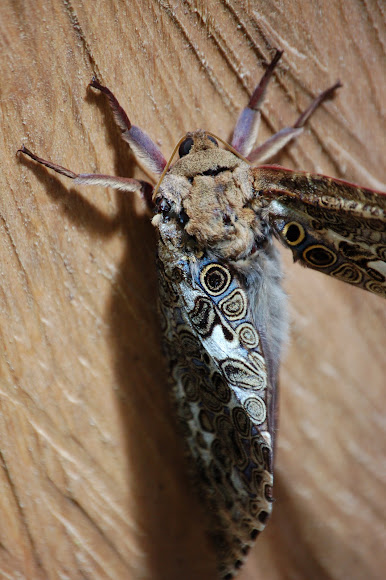 Family: Hepialidae
Andeabatis is a monotypic moth genus of the family Hepialidae. The only species is Andeabatis chilensis of southern South America.
Adults fly in late summer (February-March)
There seems to be no information on the larval stages of this moth.
Distinct from all other South American Hepialidae in size and eye-spot wing pattern. Male genitalia with sternite VIII more sclerotized than preceding segments and modified as part of the genitalia (also Parapielus). Female genitalia have a unique sternite IX lobe extending into the papillae anales in the midline. Antennal sockets separated by narrow rim (also Druceiella). Forewing scales dark-tipped.
Andeabatis is similar to Abantiades of Australia with respect to labial palpi, an annular or eye-like wing pattern, a high number of antennal segments, and male genitalia with subcaudal ventral ridge on the tegumen. The flagellum segments of Andeabatis annular whereas those of Abantiades are pectinate, and latter also have the arolium present (Nielsen and Robinson, 1983).

Dense humid forest (Tepual).
Distribution
Between 38º and 44 º S on both sides of the Andes of Chile and Argentina.

Coolest spotting in my whole summer. I had never even known such moth existed, the pattern is beautiful.
And is so big!
I was thrilled and nervous taking the pictures, obviously none came out as expected. Kids loved it too.
No common name is suggested it Orbicular moth is how I started looking for it.

I'm glad these images are useful to you. I have also updated the information here with what is on your site.
I have just sent you an email, sorry for the delay, I haven't been so active in Project Noah lately.
I have just uploaded the original set of images to flikr, with the original resolution, you can find it here: https://www.flickr.com/photos/39820277@N...

I was very interested to see your images of Andeabatis chilensis. I have a web site for the family Hepialidae and I have incorporated some of your images (with links to Project Noah) on the Andeabatis page at http://johngrehan.net/index.php/hepialid... I would like to discuss with your further some details of your observations if I may. My email address is Calabar.John@gmail.com

Gracias Michael, a pitty there aren't any books on Chilean Moths.