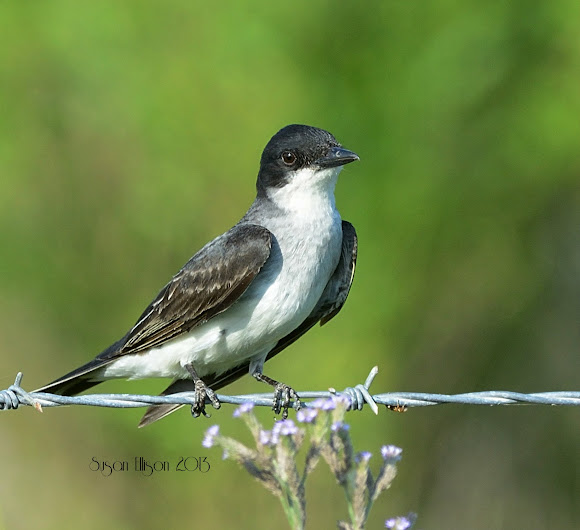 With dark gray upperparts and a neat white tip to the tail, the Eastern Kingbird looks like it’s wearing a business suit. And this big-headed, broad-shouldered bird does mean business—just watch one harassing crows, Red-tailed Hawks, Great Blue Herons, and other birds that pass over its territory. Eastern Kingbirds often perch on wires in open areas and either sally out for flying insects or flutter slowly over the tops of grasses. They spend winters in South American forests, where they eat mainly fruit.

Eastern Kingbirds breed in open habitats such as yards, fields, pastures, grasslands, or wetlands, and are especially abundant in open places along forest edges or water. They spend winters in forests of South America.

During the summer the Eastern Kingbird eats mostly flying insects and maintains a breeding territory that it defends vigorously against all other kingbirds. In the winter along the Amazon, however, it has a completely different lifestyle: it travels in flocks and eats fruit.