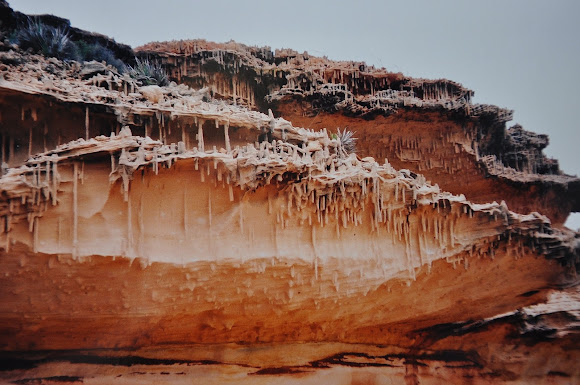 These are trace fossils - so called because they are traces or tracks left by animals rather than their body. Imagine a worm that lived millions of years ago in the Sulurian Period and the sand it burrowed through was turned to rock and the burrows remained as tubes in the rock.

Kalbarri on the seashore

Maybe I should put this on Mountains and Rocks Luis!

Thanks Gerado. Nature throws so many interesting things at us!

Sorry Neil, I have no idea about the dark crystal clusters. Maybe someone else can enlighten us. It was a long time ago and I can't recall. The worm casts had my attention.

Wow. Now this is quite an extraordinary photo, and it looks very surreal when viewed large. I love natural history, and this type of phenomenon really appeals to me. Kerry, on the rock ledge there are what appears to be dark crystal clusters. I can see four of them. Do you recall what they are? Another amazing image!!!

There are heaps of them around the rocks. Could not believe it. Yes WA has a wealth of natural wonders Mark.

That's amazing Kerry. I'll add that to my WA must visit list.