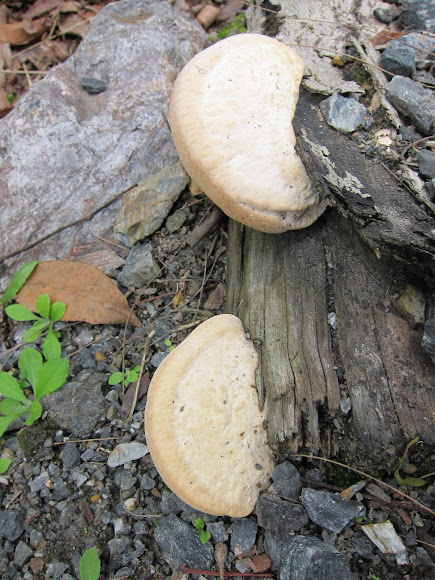 A Polypore Fungi. Polyporales (earlier known as Aphyllophorales) are basidiomycetes that lack soft gills (lamellae). They are known generally as Polypores. One of the major families is the Polyporaceae, a group of tough, leathery fungi. Polypores are usually wood-rotters. Reportedly used by Aborigines as a smouldering agent (meaning of word "punk") for transport of fire.

This specimen was located by the side of a dirt track, attached to what appeared to be a large cut tree branch or railway sleeper. Spotted in the Brisbane Botanical Gardens at Mt. Coot-Tha.

Mark, you are the man!!! Cheers for the ID. I've had a look at the blogs and a few pics, and they look pretty spot-on. Great resources you're using. I'll try and ID a few of my other spottings now... and may even find out what my golden top mushroom is. Thanks for your assistance.

I don't recall pines as such, only native trees. Closest were Wollemi Pines (which is why I was there) and Wattle trees. Mostly eucalypts around.

Fairly small then.. my link was like a couple of footballs! One thing we've learned with fungi is the good info is underneath. Some fungi nuts carry a small mirror to snap cap, gills, pores, stems in one shot... not us of course :) I'll look again with that pore shot - the pores look quite big. It looks like it might be on pine? (some needles around maybe?)

Thanks Mark. I've just uploaded another photo that shows the pores more clearly (2nd pic).The larger of the two specimens was probably 10-12 cms x 04-06 cms. A decent size. The colour of the pores was white to pale grey. I'm not a fungi fellow so find these quite frustrating to identify. hmmmm

Lovely clean specimens. How big do you reckon? Can you zoom into the pores? Might be like this one although there's a yellow tint on the pore surface and it's on a live tree (temporarily?) http://www.projectnoah.org/spottings/115...