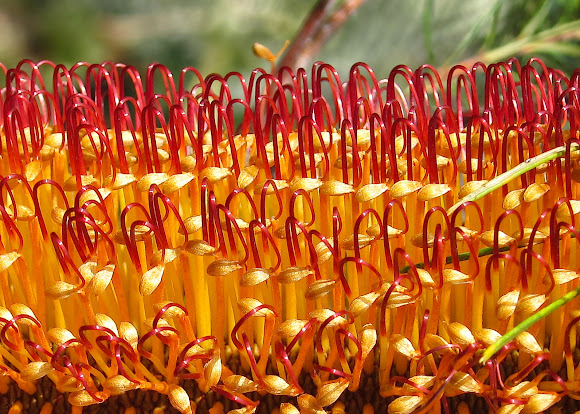 The Hairpin Banksia - Banksia spinulosa, is a species of woody shrub of the genus Banksia in the Proteaceae family, and is native to eastern Australia. It generally grows as a small shrub to 2 metres (7 ft) in height, though can be a straggly tree to 6 metres (20 ft). The distinctive inflorescences or flower spikes occur over a short period through autumn and early winter. A spike may contain hundreds or thousands of individual flowers, each of which consists of a tubular perianth made up of four united tepals, and one long wiry style.

It is found as an understorey plant in open dry forest or heathland from Victoria to northern Queensland, generally on sandstone though sometimes also clay soils. This specimen was spotted at the Brisbane Botanical Gardens, Mt. Coot-tha. Of course it was located in the semi-arid section of the gardens.

May Gibbs, an Australian author, wrote a series of children's books called Snugglepot and Cuddlepie, the first book in the series published in 1918. Snugglepot and Cuddlepie, the gumnut babies, are the protagonists of the story and are modelled on the appearance of young Eucalyptus (gum tree) nuts. The villains are the Banksia Men which are modelled on the appearance of aged Banksia 'cones', with follicles for eyes and other facial features. The last photo in this series shows the Banksia Men (which really could be one of any number of Banksia species). http://en.wikipedia.org/wiki/Snugglepot_...

great imagination on the part of May Gibbs.

Thanks. There's a story - Snugglepot and Cuddlepie which is a series of books written by Australian author May Gibbs. These are the 'big, bad, Banksia Men'! The last photo in the series shows them. They look sinister. http://en.wikipedia.org/wiki/Snugglepot_...

these have lovely seed pods.