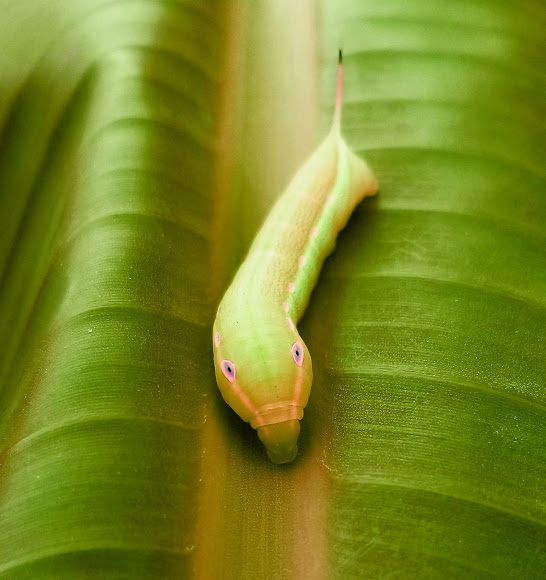 The moth of these caterpillars were given the name "sphinx" because of the caterpillar, in resting position, with the front part of the body raised in the air, was thought to resemble the Great Sphinx of Egypt. Sphinx Moths are also called hawk moths because we their wings resemble hawks' wings in shape, and because of their strong flight and hovering ability. They can fly at speeds of up to 25 mph. The Tersa Sphinx Moth is one of the most slender and streamlined of the hawk moths. It's a day-flying moth that can be found nectaring at flowers along with butterflies.The caterpillars have large eyespots behind the head. When disturbed, it tucks it's head, causing the eyespots to be more prominent. Sphinx moth caterpillars almost always have a large horn at the tip of the abdomen, but are otherwise naked, with no hairs or other physical ornamentation. Most also pupate in the soil, and the pupae have a large proboscis sticking out from the rest of the body, making the unique shape of the cocoon.

Like most sphinx moths, the tersa sphinx moth is found in woodlands and gardens in North America, including South America. It is most active at dusk as it visits flowers. The adult moth is most commonly found from mid-May through November.