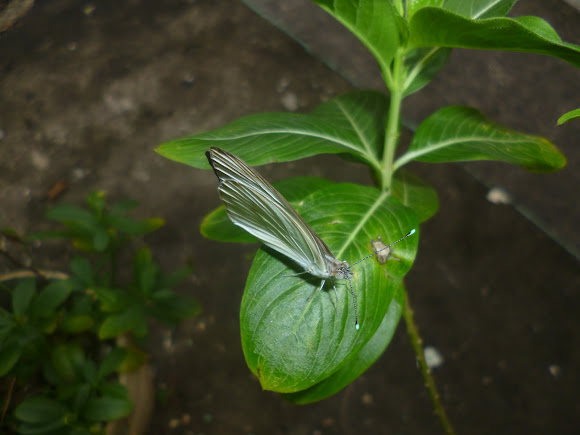 is the only species of butterfly of the genus Ascia of the Pieridae family. In this species the sexes may differ with the female being either light or dark colored.

It is found from the Atlantic and Gulf coasts of the United States, south through tropical America to Argentina. Migratory along the south-eastern coast of the United States, with strays to Maryland, Kansas, and Colorado. The wingspan is 63–86 mm. Adults are on wing all year round in southern Texas, peninsular Florida and along the Gulf Coast. Ascia monuste is an example of a migrating species that moves in one direction within its life-span and does not return. It breeds in Florida but sometimes migrates along the coast up to 160 km to breed in more suitable areas. The larvae feed on Brassicaceae (including Cakile maritima, cultivated cabbage and radish and Lepidium species) and plants in the Capparidaceae family, including nasturtium. Adults feed on nectar from various flowers including saltwort, lantana, and verbena. It is a sporadic pest of crucifer vegetables in southern Texas.

Rarely you this butterfly. I could take you a picture that was circling in an opportunity landed on a plant in my building and took some pictures.

Please, update this one:
http://www.projectnoah.org/spottings/197...