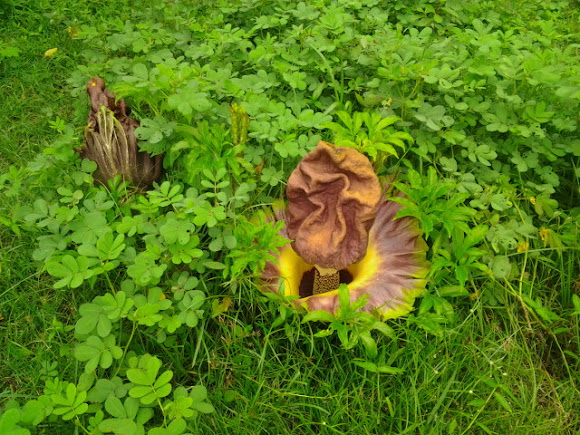 A striking aroid with a flower spike crowned with a bulbous maroon knob and encircled by a fleshy maroon and green-blotched bract. The solitary leaf, which emerges after the flowering parts, resembles a small tree. (http://www.kew.org/plants-fungi/Amorphop...)

southern China (including Taiwan), Bangladesh, India, Sri Lanka, Laos, Burma, Thailand, Vietnam, Borneo, Java, Malaya, Philippines, Sulawesi, Sumatra, New Guinea, northern Australia, Fiji and Samoa. It is found in secondary forest or highly disturbed areas, up to 800 m above sea level. It is considered naturalised in Madagascar and the Seychelles. Elephant yam has been in cultivation throughout tropical Asia for centuries. It has been widely transported by humans and easily escapes from cultivation to become naturalised, so that its natural distribution is not clear. (http://www.kew.org/plants-fungi/Amorphop...)

Elephant yam is widely cultivated for its edible tubers, which are an important source of carbohydrate in India and Indonesia and a valued secondary crop throughout tropical Asia. It can be found on sale further afield (including Hounslow, not far from Kew in the UK) in international food markets. It is also widely used as fodder. Elephant yam has medicinal properties and is used in many Ayurvedic (traditional Hindu) preparations. The tubers are considered to have pain-killing, anti-inflammatory, anti-flatulence, digestive, aphrodisiac, rejuvenating and tonic properties. They are traditionally used in the treatment of a wide range of conditions including parasitic worms, inflammation, coughs, flatulence, constipation, anaemia, haemorrhoids and fatigue. Further research is needed to determine the pharmacological properties of elephant yam. Elephant yam is cultivated as an ornamental for its striking compound foliage and unusual and dramatic flowering and fruiting structures.(http://www.kew.org/plants-fungi/Amorphophallus-paeoniifolius.htm)

I have a ELEPHANT FOOT YAM in BATANGAS