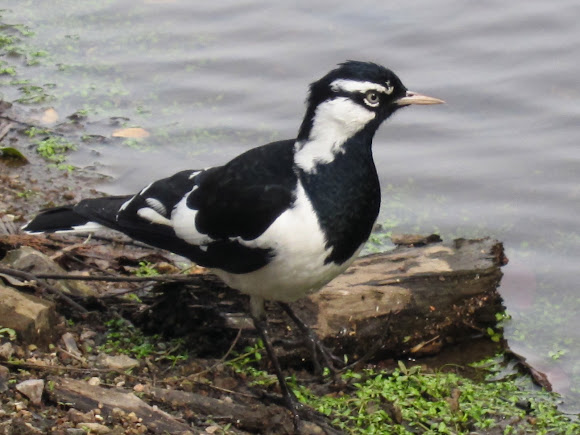 I refuse to call this bird a magpie-lark, because it is neither a magpie nor a lark. To me, it is a peewee, the common name used in NSW and QLD. In Victoria and WA, it's known as a mudlark. It is often confused with the Australian magpie (Gymnorhina tibicen), even though the peewee is a smaller bird. The name "peewee" comes the sound of its distinctive calls. It's around 26 to 30 cm long when fully grown, or about the same size as a European common blackbird, and boldly pied in black and white. The sexes are similar from a distance but easy to tell apart: the female has a white throat, the male a black throat and a white "eyebrow." It's mostly ground-dwelling, and is usually seen slowly searching on the ground for a variety of insects and their larvae, as well as earthworms and freshwater invertebrates. It had been relegated to a subfamily of fantails in the family Dicruridae (drongos), but has been placed in a new family of Monarchidae (monarch flycatchers) since 2008.

Found in almost any habitat except rainforests and the driest deserts. Common and very widespread in urban and rural areas. This little fellow was found by the lake at the Brisbane Botanical Gardens, Mt. Coot-Tha.