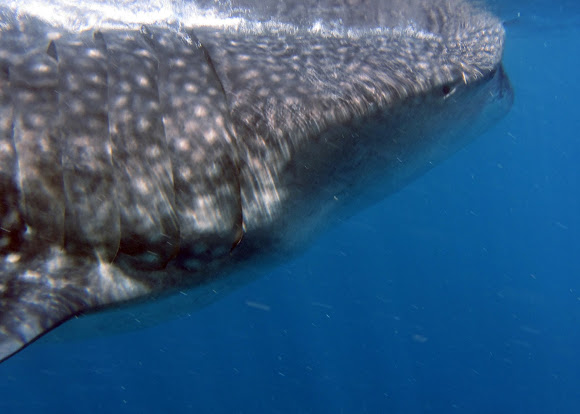 Photo taken open sea near Isla Mujeres Mexico. back to water after 6 months an epic day. a slow-moving filter feeding shark and the largest extant fish species. The largest confirmed individual had a length of 12.65 mt and a weight of more than 21.5 tonnes , and there are unconfirmed reports of considerably larger whale sharks. Claims of individuals over 14 mt long and weighing at least 30 tonnes are not uncommon.

What a great encounter Gerardo! Glad to see you're back in the water:-)

Thanks so much Leanne indeed is very special to me :)
Thanks Mona :)

What an experience! Congratulations Gerardo. This is the most wonderful spotting :)

Thanks so much guys, feels good to get back home :)

So close! You lucky man.

Looks like you are having tons of fun, Gerardo. I am glad to know you are ok and back to the sea. C heers my friend.

So jealous of this! I would love to swim with these guys :)