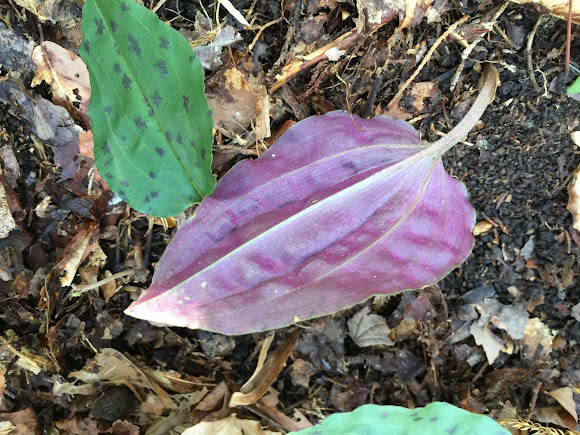 Cranefly Orchid’s stemmed flowers bloom along an unbranched stalk. The flowers don’t all bloom at once; they start blooming from the bottom of the stalk, working up to the top. This gradual blossoming extends their chances for pollination over a longer period, usually about three weeks. There is a solitary stem per plant that appears in summer - June through September, depending on the region In bloom, Cranefly Orchid grows to a height of about 15-20 inches (38-50 cm). Inflorescence can bear up to 55 small green, greenish yellow, or greenish purple blossoms resembling a group of Crane Flies hovering which gives the genus it’ name Tipularia. Species name discolor is "di-scolor" rather than "dis-color", referring to the two colors, from the contrast of the upper and lower leaf surfaces). Crippled Cranefly One unusual characteristic of these flowers is a distinct asymmetry (the vast majority of orchid flowers are bilaterally symmetrical). If you take the lip as a reference, the column is tilted to one side or the other, as is the dorsal sepal. One of the lateral petals is also skewed, often overlapping the lateral sepal on that same side. This gives the flowers the look of an injured fly, hence its common name of 'Crippled Cranefly Orchid'. --------------- Included in Wildflowers of the Pine Barrens of New Jersey, by Howard B. Boyd page 110 Blooms Late June through August The reason that the Cranefly Orchid stands out during winter is that it is evergreen. More so, if you flip the leaf over, it is a bright purple underneath. Tipularia discolor grows a single leaf in September that disappears in the spring. The leaf is green with dark purple spots. The flower blooms in mid-July to late August. The roots are a connected series of corms. Its roots are edible. They are starchy and almost potato-like. The plant is pollinated by Noctuid Moths, by means of flowers which incline slightly to the right or left, so the pollinaria can attach to one of the moth's eyes. Rare Observed in at least one Pine Barrens location. Crane-fly Orchids are endangered, threatened, or rare in several states. ----------------------- Producing flowers and fruit have a big cost in energy for Cranefly Orchids. As a result, they don’t bloom every year. Even the size of the leaf produced in winter may vary, depending on how much energy the plant has available. The seed capsules each contains many tiny seeds.

Video - https://www.youtube.com/watch?v=L9I1VYht... Scientific Synonyms: Tipularia unifolia and Plectrurus discolor Etymology: Tipularia comes from the Latin for “Cranefly” tipularia comes from the name of the Cranefly insect genus Tipula Despite their common name, they are not pollinated by craneflies Latin epithet di-scolor, refers to the fact that the upper and lower sides of the leaf are of two different colors. The unusual flower shape and small size has also led to another common name: Elfin Spurs. It is the only species of the genus Tipularia found in North America.