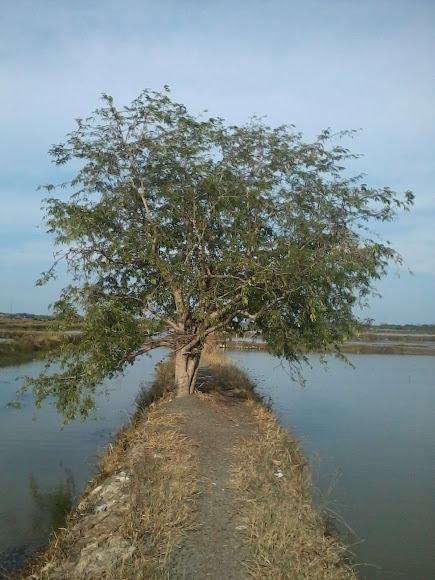 The tamarind is a long-lived, medium-growth, bushy tree, which attains a maximum crown height of 12 to 18 metres (40 to 60 feet). The crown has an irregular, vase-shaped outline of dense foliage. The tree grows well in full sun in clay, loam, sandy, and acidic soil types, with a high drought and aerosol salt (wind-borne salt as found in coastal areas) resistance. Leaves are evergreen, bright green in color, elliptical ovular, arrangement is alternate, of the pinnately compound type, with pinnate venation and less than 5 cm (2 inches) in length. The branches droop from a single, central trunk as the tree matures and is often pruned in human agriculture to optimize tree density and ease of fruit harvest. At night, the leaflets close up. The tamarind does flower, though inconspicuously, with red and yellow elongated flowers. Flowers are 2.5 cm wide (one inch), five-petalled, borne in small racemes, and yellow with orange or red streaks. Buds are pink as the four sepals are pink and are lost when the flower blooms. The fruit is an indehiscent legume, sometimes called a pod, 12 to 15 cm (3 to 6 inches) in length, with a hard, brown shell. The fruit has a fleshy, juicy, acidulous pulp. It is mature when the flesh is coloured brown or reddish-brown. The tamarinds of Asia have longer pods containing six to 12 seeds, whereas African and West Indian varieties have short pods containing one to six seeds. The seeds are somewhat flattened, and glossy brown. The tamarind is best described as sweet and sour in taste, and is high in acid, sugar, B vitamins and, oddly for a fruit, calcium. As a tropical species, it is frost sensitive. The pinnate leaves with opposite leaflets give a billowing effect in the wind. Tamarind timber consists of hard, dark red heartwood and softer, yellowish sapwood. Tamarind is harvested by pulling the pod from its stalk. A mature tree may be capable of producing up to 175 kg (350 lb) of fruit per year. Veneer grafting, shield (T or inverted T) budding, and air layering may be used to propagate desirable selections. Such trees will usually fruit within three to four years if provided optimum growing conditions.