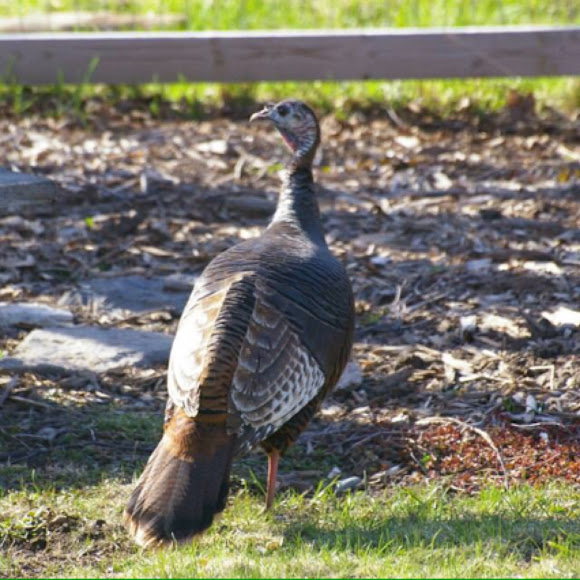 Adult wild turkeys have long reddish-yellow to grayish-green legs. The body feathers are generally blackish and dark brown overall with a coppery sheen that becomes more complex in adult males. Adult males, called toms or gobblers, have a large, featherless, reddish head, red throat, and red wattles on the throat and neck. The head has fleshy growths called caruncles. Juvenile males are called jakes, the difference between an adult male and a juvenile is that the jake has a very short beard and his tail fan has longer feathers in the middle. The adult male's tail fan will be all the same length.[3] When males are excited, a fleshy flap on the bill expands, and this, the wattles and the bare skin of the head and neck all become engorged with blood, almost concealing the eyes and bill. The long fleshy object over a male's beak is called a snood. When a male turkey is excited, its head turns blue; when ready to fight, it turns red. Each foot has three toes in front, with a shorter, rear-facing toe in back; males have a spur behind each of their lower legs.[4] Male turkeys have a long, dark, fan-shaped tail and glossy bronze wings. As with many other species of the Galliformes, turkeys exhibit strong sexual dimorphism. The male is substantially larger than the female, and his feathers have areas of red, purple, green, copper, bronze, and gold iridescence. Females, called hens, have feathers that are duller overall, in shades of brown and gray. Parasites can dull coloration of both sexes; in males, coloration may serve as a signal of health.[5] The primary wing feathers have white bars. Turkeys have 5000 to 6000 feathers.[6] Tail feathers are of the same length in adults, different lengths in juveniles. Males typically have a "beard", a tuft of coarse hair (modified feathers) growing from the center of the breast. Beards average 230 mm (9.1 in) in length. In some populations, 10 to 20% of females have a beard, usually shorter and thinner than that of the male. The adult male (or "tom") normally weighs from 5 to 11 kg (11 to 24 lb) and measures 100–125 cm (39–49 in) in length. The adult female (or "hen") is typically much smaller at 2.5–5.4 kg (5.5–11.9 lb) and is 76 to 95 cm (30 to 37 in) long.[7][8] The wings are relatively small, as is typical of the galliform order, and the wingspan ranges from 1.25 to 1.44 m (4 ft 1 in to 4 ft 9 in). The wing chord is only 20 to 21.4 cm (7.9 to 8.4 in). The bill is also relatively small, as adults measure 2 to 3.2 cm (0.79 to 1.26 in) in culmen length.[9] The tarsus of the Wild Turkey is quite long and sturdy, measuring from 9.7 to 19.1 cm (3.8 to 7.5 in). The tail is also relatively long, ranging from 24.5 to 50.5 cm (9.6 to 19.9 in).[10] The record-sized adult male Wild Turkey, according to the National Wild Turkey Federation, weighed 16.85 kg (37.1 lb), with records of tom turkeys weighing over 13.8 kg (30 lb) uncommon but not rare.[11] While it is usually rather lighter than the waterfowl, after the Trumpeter Swan, the turkey has the second heaviest maximum weight of any North American bird. Going on average mass, several other birds on the continent, including the American White Pelican and the very rare California Condor and Whooping Crane surpass the mean weight of turkeys, although none of these other species are as sexually dimorphic in size.[12][13] Wikipedia