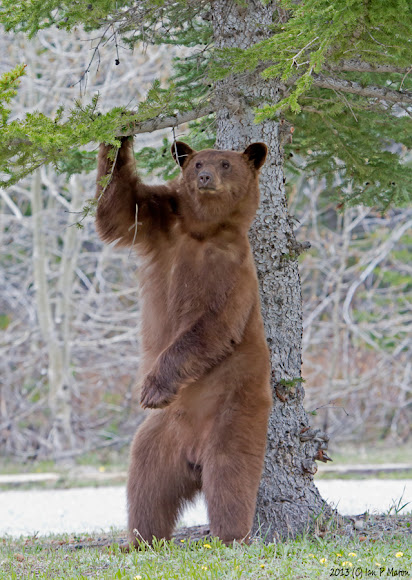 This cinnamon colored black bear is a color phase of the American black bear which is a medium-sized bear native to North America. He appeared to be looking for something edible in the tree.

This was a fairly open mountain valley car park surrounded by conifers on one side and a few aspens on the other. The Bear was seen feeding on dandelions along the cut verges of the car park. It eventually disappeared into the conifers.

I was sorting through some photographs taken last year and came across this one. Perhaps not my sharpest ever photograph but I do like the pose.

Thanks very much, Ian

Wow, what a shot! Can you put in the habitat of your spotting? Actually, here is what Project Noah advises for Habitat information. "Please state the actual habitat where you photographed the spotting ... . Again, it is not necessary to state published habitat information here, this can be referenced in the 'reference links' box." See http://www.projectnoah.org/faq Thanks!