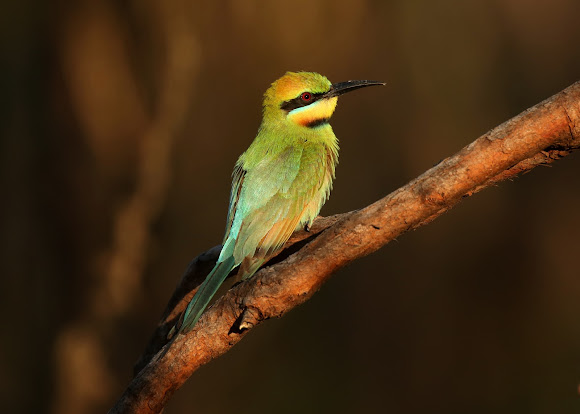 A beautiful bird, essentially shades of green and blue, a yellow throat patch with a dark stripe above the breast. black eye-stripe with a thin line of blue below that. The eye is bright red and in flight the under-wings are a rusty buff. This species also has two fine long tail filaments.

These two were spotted in eucalypt forest just inland from mangrove forest on the outskirts of Darwin in the Northern Territory, Australia.

This is the only species of Meropidae found in Australia. I photographed them late in the day and was lucky to get this close to these often restless birds while they were still feeding.

A very belated congratulations on your SOTD. A stunning little bird, hard to believe the colours!

Thank you Antonio for your comment. Also thank you Amanda. Its brilliant that your class can enjoy and appreciate the beautiful creatures and plants here on PN. If it makes just one of them sit up and take notice of this world around us and how to protect it, then that's got to be a good thing :)

Congrats triggsturner for the SOTD!

Thank you Daniele for the sotd. Very honoured and much appreciated.

Amanda43 a year ago

Beautiful. My class loved looking at it and learning about Project Noah.

Just beautiful Robert,congrats on the well deserved SOTD and thanks for sharing

These are stunning in the late afternoon light Robert! Congratulation, your
Rainbow Bee-eaters are featured as Spotting of the Day:

"Brilliantly colored! This aptly named Rainbow Bee-eater (Merops ornatus) is our Spotting of the Day. The Rainbow Bee-eater is widely distributed throughout mainland Australia, as well as from eastern Indonesia through to Papua New Guinea, in the Bismarck Archipelago and, rarely, in the Solomon Islands. It is the only species of bee-eater (family Meropidae) found in Australia. Rainbow Bee-eaters are migratory birds that nest by burrowing long tunnels into river beds. They are mostly insectivorous, catching flying insects (bees and others) on the wing.
Spotted in the Northern Territory, Australia, by triggsturner. Check out the spotting to discover the bee-eater's tail streamers".

Thank you Jim and Zlatan for your comments. Yes Jim, Australia is an amazing place to watch and photograph wildlife. I dont think I have ever been and not seen something incredible.

Thank you Brian. The light was amazing.

Nice spotting, Rob. That Australia trip was a windfall of spottings...I envy you!