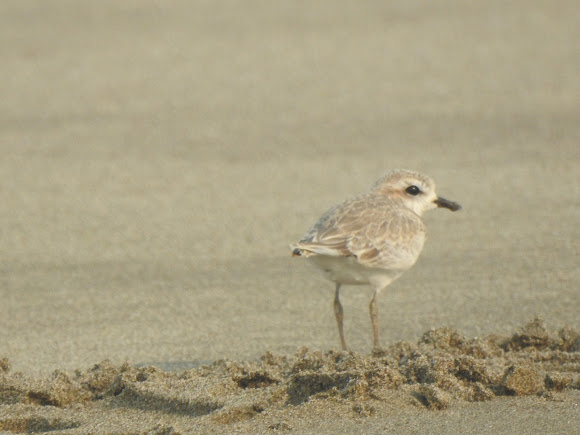 one of the smallest N American shore birds, sand colored and thus hard to spot on the beaches and foredunes where it lives. It is endangered, but recovering on the West Coast, especially Oregon where at one time the species was down to 50 individuals in the entire state. Habitat loss and predators are a constant threat and the species is heavily managed. They nest on the dunes in open scrapes, and when the chicks hatch they follow the male parent to the beach to learn to feed, the female flying off to find another mate. The chicks had once been hampered by europian beach grass used to stabilize the dunes. Now areas are polwed annually, and clear spaces made to allows the young to get to the beach where they feed at the wrackline or at the water's edge and small invertibrates. ONce fledged, the male goes to find a another mate. First wave of fledglings may attempt to nest. The average lifespan of this bird is under 3 years, however, if they survive past this stage, they will often live into their teens. Chick and nest mortality is extremely high. Males have the dark eye smudge and scapular markings, females and juveniles are similar - sandy without the dark markings

China Beach St Park, Bandon, Oregon, The breeding grounds are cordoned off to prevent humans and their dogs from disturbing nests. Foxes, crows and ravens are removed tp prevent predation. Biologists once placed loose cages over the nests which increased chick survival but increased adult mortality and the practice had to be abandoned.

We were on the beach when the local biologist was out counting. He stopped several times to point out birds and give us tips for finding them. ONce they hunker down they are almost invisible and you can be looking at 100 and not know We walked up to where they "roost" on the sand, protected from human beach walkers by a wide creek and saw close to 100 at a distance where they were roosting with sanderlings

Thank you! That was our singular goal Friday - too see these guys. We had one accidental sighting last month, when a juvie, apparently made a wrong turn with a group of semi-palmateds & sanderlings and ended up just slightly inland from this location, feeding at the edge of a small creek.