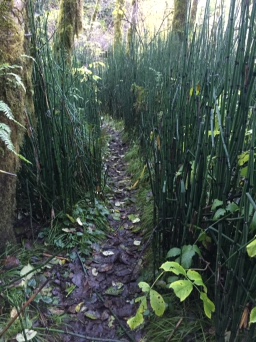 Scouring Rush (Equisetum hyemale affine) is not a rush, but a horsetail. The horsetails are closely related to ferns and both were common during the Carboniferous period (280-345 million years ago), when tree-sized horsetails and ferns occurred. This perennial plant is 2-5' tall, producing both fertile and infertile shoots. Each shoot has a single central stem that is jointed, unbranched, more or less erect, and ¼–¾" (6-18 mm.) across. The central stem is medium green, olive-green, or dark green, rough in texture, and evergreen. The individual joints that make up the central stem are up to several inches long; the upper joints are usually shorter than the lower joints. The stem joints have about 15-40 fine longitudinal ridges. At the conjunctions of adjacent joints, there are appressed ring-like sheaths up to ¾" long. Except along their upper and lower rims, the sheaths are whitish grey, brown, or black. The lower rims of these sheaths are usually black, while their upper rims have 15-40 tiny black teeth (scale-like leaves). These teeth are semi-deciduous and they often break off the sheaths with age. The interior cavity of the central stem is quite large, spanning at least two-thirds of its diameter. The central stem of each fertile shoot terminates in a spore-bearing cone up to 2" long on a short stalk. This cone is ovoid to broadly ellipsoid in shape, and it has a short narrow point at its apex. The cone is densely covered with rows of spore-bearing tubercles; it is usually pale yellow or pale reddish yellow. Instead of a single terminal cone, sometimes an older shoot will produce 1-4 spore-bearing cones on short lateral stalks just below its terminal joint. Infertile shoots are very similar to fertile shoots, except they lack spore-bearing cones. The cones release their spores from late spring to mid-summer; they wither away later in the year. The root system consists of extensive rhizomes with fibrous secondary roots. This plant often forms dense colonies; sometimes these colonies can be quite large in size.

Not Edible. Medicinal use for professional herbalists only. Called scouring rush because it was and can be used as a scrub brush. Some people can make them into a flute whistle type instrument. Some Plateau Indian tribes boiled the stalks to produce a drink used as a diuretic and to treat venereal disease.[10] It is used as a homeopathic remedy.[4]