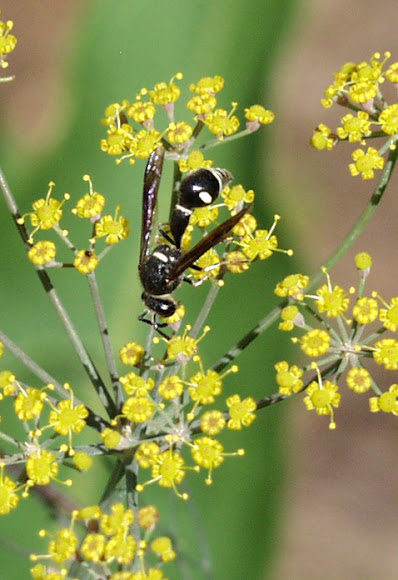 Eumenes is the type genus of the subfamily Eumeninae ("potter wasps") of Vespidae. It is a large and widespread genus, with over 100 taxa (species and subspecies), mostly occurring in the temperate portions of the Northern Hemisphere. Most species are black or brown, and commonly marked with strikingly contrasting patterns of yellow, white, orange, or red (or combinations thereof). Like most vespids, their wings are folded longitudinally at rest. The first metasomal segment is narrow and elongated, creating a "bulbous" appearance to the abdomen. The genus was named after the Greek general Eumenes. The root of the name has been widely used to construct many other genus-level names for potter wasps with petiolated metasoma, such as Brachymenes, Santamenes, Oreumenes, Pachymenes, Katamenes, etc. Most of those groups have been treated as part of the genus Eumenes for a long time.

This was taken in a suburban herb garden on a Dill plant.

Thanks for the ID Rick! I agree it is a Potter Wasp (I didn't see your suggestion until today, sorry!)