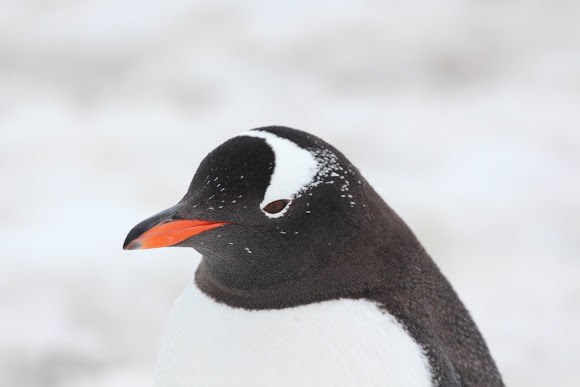 The gentoo penguin is easily recognized by the wide white stripe extending like a bonnet across the top of its head and its bright orange-red bill.

During a 12 day cruise of the Antarctic peninsula we saw thousands of Gentoo penguins. We saw them everyday we were there. They had just arrived to breed on the rocky areas, after a long winter feeding at sea. We were not allowed to approach within about 10m of any colonies but that didn't stop the penguins from coming to you. If you stayed sitting or crouched they would often walk right past you, within 1m, such an amazing experience of an animal with no fear of humans. I heard talk of others on the cruise becoming unenthused about seeing Gentoos everyday but I never tired of them. Upon approaching land in the Zodiac, we often smelled them before we saw them. Along with Gentoo penguins, we also saw Chinstrap penguins, though only a dozen or so and only one Adelie penguin. The last photo shows a colony near an old research station.

What an experience Dan. I envy you, except for the cold. Not sure I could do that anymore. I may have to settle for the "tropical" penguins :-) Thanks for sharing. I missed this when it was named SOTW. Belated congratulations.

Sounds like a great trip ! Love hearing personal experiences like this and the photo of the old research station is lovely Dan. Thanks.

Congrats on your SOTW Dan. Great series. I love these guys.

Thanks Daniele for SOTW and thank you Antonio and Greg. Was definitely an epic experience.

Great spotting congratulations on SOTW...it must have been great fun to hangout with them.

Awesome series Dan,congrats on the well deserved SOTW and thanks for sharing

Congratulations Dan, your Gentoo penguins have been voted Spotting of the Week! Your multiple pictures, your account of your personal experience together with sharing an iconic species and location with us won you the vote.

"Like other penguins, Gentoo penguins (Pygoscelis papua) come ashore during breeding season to form huge colonies. In our Spotting of the Week world traveller and Project Noah Ranger Dan Doucette shares his impressions of multiple encounters with Gentoo penguins during 12 days around the Antarctic peninsula. Check it out!"

Thanks Daniele and maple moth!