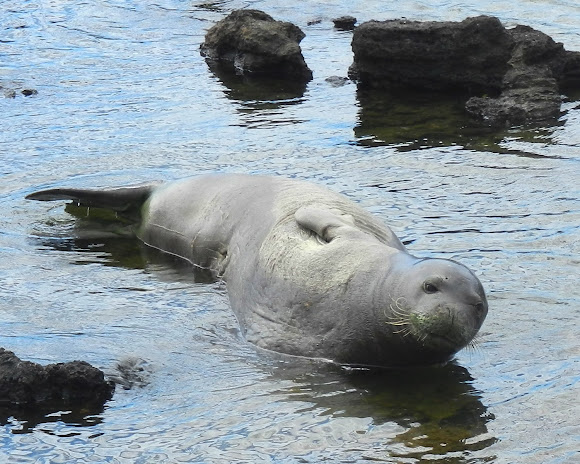 The Hawaiian monk seal, is an endangered species of earless seal in the Phocidae family that is the only seal native to Hawaii. These monk seals are a conservation reliant endangered species. The small population of about 1,100 individuals is threatened by human encroachment, very low levels of genetic variation, entanglement in fishing nets, marine debris, disease, and past commercial hunting for skins.

Hawaiian Monk Seal spotted at Kaena Point, in a small nature preserve on the far western tip of Oahu, Hawaii.

This was one of the few times the Monk Seals were active enough to "smile" for the camera. Usually they just lay there motionless.

Congratulations on the spotting of the day!

Well then, thank you much KarenL.

Congrats SargonR, your great capture is our Spotting of the Day! Only around 1,100 individuals remain of the seal Hawaiians call `Ilio holo I ka uaua,” (dog that runs in rough water), and the population is declining due to human encroachment, entanglement in fishing nets, marine debris, and disease.

Many thanks! The hardest part of getting a good shot of one of these guys is getting them when they look "alert" and not just passed out sleeping.