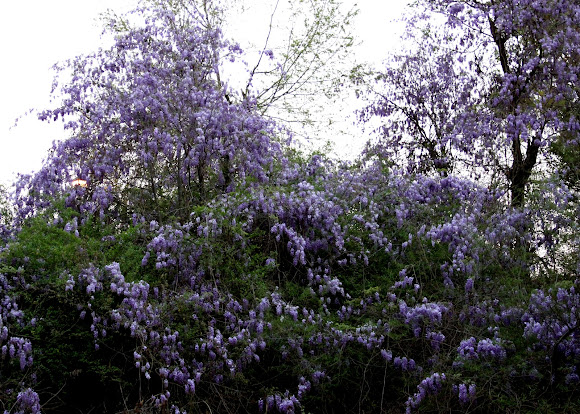 Prolific and pea-faced, an early spring bloomer. Extremely hardy plant considered an invasive species (especially in the Southeast U.S.) due to its ability to overwhelm native species, as in the first photo. Still, people have an affection for wisteria, and often include single plants in their yards.

Story about the spelling from Wikipedia: The botanist Thomas Nuttall said he named the genus Wisteria in memory of Dr. Caspar Wistar (1761–1818). Questioned about the spelling later, Nuttall said it was for "euphony," but his biographer speculated that it may have something to do with Nuttall's friend Charles Jones Wister Sr., of Grumblethorpe, the grandson of the merchant John Wister. (Some Philadelphia sources state that the plant is named after Wister.) As the spelling is apparently deliberate, there is no justification for changing the genus name under the International Code of Botanical Nomenclature. However, some spell the plant's common name "wistaria."

They really really are, but they'll take over the world if you let them!

This is such a beautiful tree!