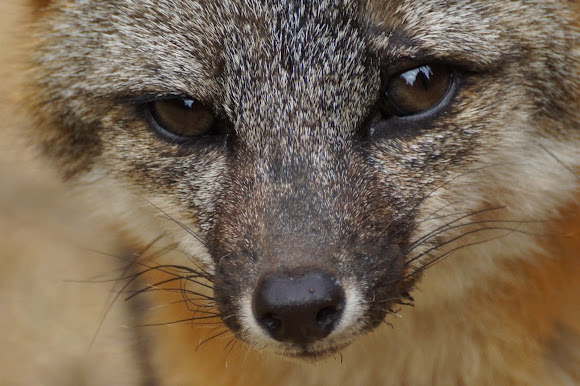 Grey Fox is salt and pepper fur with rusty underneath and dark stripe down to the black tip on it's tail. Grey Foxes are smaller then the Red Foxes. Known to be able to climb trees.
Best distinctions between Gray and Red Fox is the Red Fox has black stocking legs and white tip on it's tail. Dieting on small rodents, birds, fruit and vegetables. Listed as nocturnal these frequently found in early hours.

Open woodlands, dense forests, near picnic areas and near marshes

To start off this is a wild Gray Fox not a captive one. But has over the years been unintentionally fed by visitors.
I was with two other birders looking for the Great Horned Owls when I spotted this in an empty picnic area. As we were photographing it, it settled we were not a threat and actually came up to us and followed us as we continued searching for the owls.

Thanks Ellis. Quite a collection !!

too cute! Which park is this?

Thank you micam1, I just learned today the same fox made a visit to the park staff office.

so cute i love it

Thank you Kathleen. I have been wanting to get a good shot of a fox, but didn't expect this at all. It made my day, and the owls we finally found.

We were looking for the owls and I spotted it first so we noticed it didn't run so we walked up to about 30ft near the picnic tables. That's the image where it was standing sideways and sitting. Then it started to walk towards us. We expected it to stop but then it came 4 to 5ft (shot of it facing us and the closeup), where I didn't have to use my zoom. I didn't have room for the shot as it yawned. Then when we thought we had enough we just walked away to where we spotted one of the owls. One of the guys turned and noticed the fox was following us about 10ft away. It stayed awhile longer til we split up (the 2nd shot) and went to look for the other owls. Once we left the picnic area it had disappeared. Guessing it figured we weren't going to feed it.

Wow yeah I see what you mean. Were you sitting still when you saw it and approached you?

And I also noticed it may have been injured when it was younger because the eyes are not equal and what looks like a scar above the right eye.

Thank you Joshua. I was so surprised it didn't run and instead seemed almost tame. Funny is when it started to follow us while we went to search for the owls like some kind of pet.

Also forgot to mention it was so close I could see a large fat tick at the base of the ear.

Thank you. Last time I saw it, it was shy and hid in the trees. This time or a different one, it was really unafraid. It stopped about 4 ft from us. But then we kept looking for the owls and it decided to follow us. It eventually got bored of us and walked into the woods.