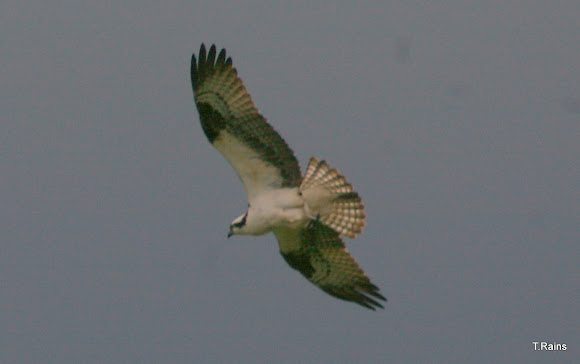 Nesting near lagoon and bay. Flying,hunting at bay.

I have been observing this Osprey at it's nest and bay hunting. It is one of a pair. Now it has young at the nest. Mainly it is hunting at the bay then returning with catch to the nest. It used to perch below the nest or on the ground near the nest to eat it's catch before it's young hatched. Sometimes now it will make two separate hunts during one visit at the bay. It will eat first at the bay on a old dock piling. Then it will hunt again taking a second catch to the nest. It has an interesting fishing hunting style. It will use two tall old tree poles that are stationary out in the bay standing upright 20 ft above the water. The Osprey will watch the water from one pole then fly to the other pole watching. The poles are about 100 ft apart. Between the poles it will chose the spot to finally flutter and dive for catch. The one fish it catches is about 6 inches long. The Osprey hunts in this manner once every 3-4 hours. Each time it goes from nest to bay and back to nest.