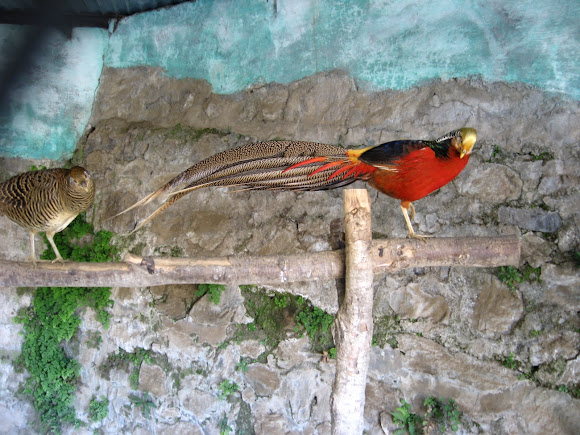 Males have a golden-yellow crest with a hint of red at the tip. The face, throat, chin, and the sides of neck are rusty tan. The wattles and orbital skin are both yellow in colour, and the ruff or cape is light orange. The upper back is green and the rest of the back and rump is golden-yellow. The tertiaries are blue whereas the scapulars are dark red. Other characteristics of the male plumage are the central tail feathers, black spotted with cinnamon, as well as the tip of the tail being a cinnamon buff. The upper tail coverts are the same colour as the central tail feathers. The male also has a scarlet breast, and scarlet and light chestnut flanks and underparts. Lower legs and feet are a dull yellow.

The Golden Pheasant is commonly found in zoos and aviaries, but often as impure specimens that have the similar Lady Amherst's Pheasant in their lineage. Parts of Asia, South-East Asia, India.