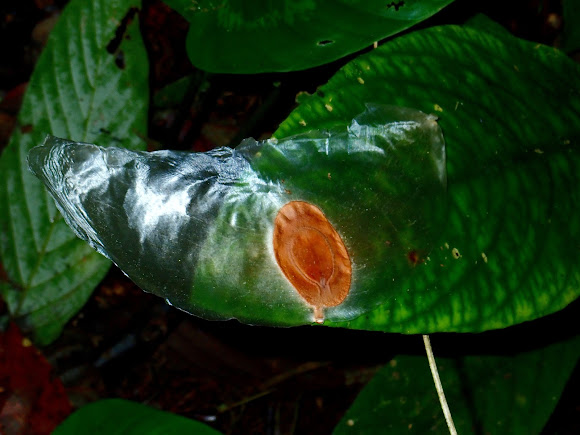 Seed Pod of Javan Cucumber - Alsomitra macrocarpa. They are called 'Gliders' with 2 lateral wings that resemble the wings of an airplane. They become airborne when released from their fruit and sail through the air like a true glider. The plant bears football-sized gourds hang from the vine high in the forest canopy, each packed with hundreds of winged seeds. The seeds have two papery, membranous wings, with combined wingspans of up to 13 cm. They reportedly inspired the wing design of some early aircraft, gliders and kites. Although the seeds vary in shape, some of the most symmetrical ones superficially resemble the shape of the "flying wing" aircraft or a modern Stealth Bomber.

Hi Hannahemilyolson, thanks for your appreciation.
Yes, I am agreeable to let you use my picture here at Project Noah as requested by you provided you credit it to me and also as you suggested, with a link to this page. Thanks

Love your pictures! I came across Project Noah as I was looking for an image of Javan Cucumber Seeds I could use in a lesson plan on seeds and how they utilize different dispersal methods to prosper.

I'm a co-founder of MyStemKits.com, a company which provides hands-on learning tools for teachers that they can 3D print and utilize in the classroom. We offer access to our full library through a subscription service (as opposed to selling individual items or lesson plans). We have a 3D model of a javan cucumber seed, but would love to include an image with the lesson plan as well.

Can we use this one as long as we include the link to the original source? Thank you for your time!