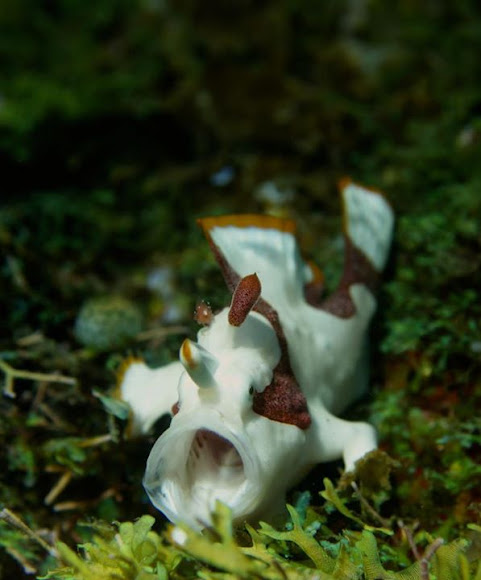 This is a Juvenile of a Warty Frogfish, size of just around 1.5cm. They are very cute when small, and this one was 'yawning', sometimes they do that, supposedly to make them look 'bigger' The warty frogfish grows up to 15 cm (5.9 in) long. Like other members of its family, it has a globulous, extensible body, and the soft skin is covered with small dermal spinules. The skin is covered with numerous small, wart-like protuberances. Its large prognathous mouth allows it to consume prey its same size. The coloring of the body is extremely variable because they always tend to match their living environments. Frogfishes have the capacity to change coloration and pigment pattern in few weeks. However, the dominant coloration goes from white to black, passing through a whole range of related nuances such as cream, pink, yellow, red, and brown, often with dark, circular spots and/or with saddles. Some heavily spotted specimens can easily be confused with its closed relative Antennarius pictus. This characteristic can help to separate them: usually, A. maculatus has red or orange margins on all fins and sometimes a spike of the saddle blotch start posterior to the eye. The first dorsal spine, the illicium is modified and is used as a fishing rod. Its extremity is endowed with a characteristic esca (lure), this latter looks like a small fish with a pinkish to brownish coloration. The illicium is twice the length of the second dorsal spine and its often darkly banded. The second dorsal spine is practically straight and is mobile, and the third one is bent towards the back of the body; both are membranously attached to the head. They are well separated from each other and also from the dorsal fin. The pectoral fins are angled and help, with the pelvic fins, to move the fish on the bottom and to keep a stable position for ambush.

The warty frogfish is found in sheltered rocky and coral reefs; adults are usually associated with sponges down to 20 metres (66 ft) deep. In Juvenile phase, they are benthic and most likely found around sandy/seagrass bottom or rocky and coral rubbles.