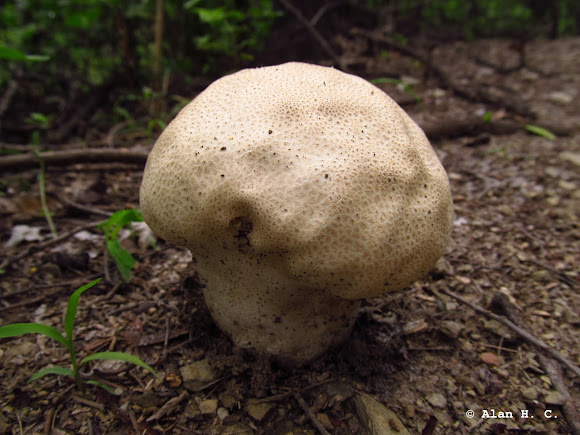 The fruit bodies of Calvatia craniiformis grow to dimensions of 6–20 cm (2.4–7.9 in) tall by 8–20 cm (3.1–7.9 in) wide, and have a form ranging from pear-shaped,[12] to flattened-spherical, to obovate (roughly egg-shaped), to tunicate (like an inverted cone). At the bottom is a thick, often crumpled base attached to a cord-like rhizomorph, which is often encrusted with surrounding soil. The rhizomorphs are well developed, and when cut into longitudinal section, reveal three distinct tissues: an outer cortex, a subcortical layer, and a central core. The thin and fragile exoperidium (the outer layer of "skin") is whitish-gray to gray, and initially smooth before becoming areolate (divided by cracks into discrete areas). The base extends up one-third to one-half way into the puffball (where it becomes the columnella) tapering to a point. The gleba is initially whitish, and then yellow-green, and finally brownish-green in older specimens with mature spores. Spores are spherical, hyaline (translucent), and measure 2.5–3.4 μm in diameter. They are thick-walled with a short pedicel (a tubelike extension), and are ornamented with tiny spines (verrucae) that are roughly equidistant from each other. Capillitial threads are long, hyaline, and branched, measuring 2.4–4 μm thick. They are septate and occasionally have pits on their walls. The exoperidium comprises thick-walled, inflated hyphae mixed with sphaerocysts (spherical cells), while the endoperidium is made of tightly interwoven, thick-walled hyphae. In the rhizomorphs, the hyphae in the central core are several times as thick as those in the surrounding subcortex. Using light microscopy, the spores of Calvatia craniiformis are generally indistinguishable from those of C. rubroflava and C. gigantea; electron microscopy reveals that each has distinctive spore ornamentation. C. craniiformis features small, well-separated verrucae (wartlike projections) up to 0.2 μm tall with rounded tips. In comparison, C. gigantea has larger verrucae (up to 0.4 μm tall) that are more irregularly arranged.

Brain puffballs grow singly or in groups in fields and open woods, hardwood forests, and wet areas. In Asia, it has been recorded from China, India, Indonesia, Japan, Malaysia, and South Korea. The brain puffball has been recorded from Australia. In North America, its range includes the eastern and southern United States, and Mexico. In Michigan, it is one of the few macrofungi found regularly in black locust plantations. Fruit bodies serve as a food source for several species of flies.