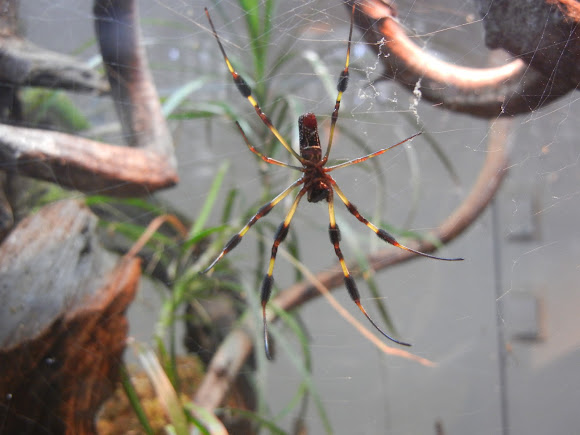 The golden silk orb-weavers (genus Nephila) are a genus of araneomorph spiders noted for the impressive webs they weave. Nephila consists of numerous individual species found around the world. They are also commonly called golden orb-weavers, giant wood spiders, or banana spiders. In North America, the golden silk orb-weavers (see also Nephila clavipes) are sometimes referred to as writing spiders due to occasional zigzag patterns (stabilimenta) built into their webs, though these occur much more frequently in the webs of Argiope, such as the St Andrew's Cross spider. The species N. jurassica, which lived about 165 million years ago, had a leg span of some 15 cm (6 inches), and is the largest known fossilized spider. The genus name Nephila is derived from Ancient Greek, meaning "fond of spinning", from the words (nen) = to spin (related to nema νήμα "thread") + φίλος (philos) = "love".

Golden silk orb-weavers are widespread in warmer regions throughout the world, with species in Australia, Asia, Africa (including Madagascar), and the Americas. One species, N. clavipes, occurs in the United States of America, where it ranges throughout the coastal southeast and inland, from North Carolina to Texas.

@LadyArachnophile: Yes, it was a captive specimen at the California Academy of Sciences in San Francisco. It would be so cool if they lived in the wild here! Thanks for your comment.

Hi David, was this a captive specimen somewhere? Or was it found outdoors in nature? Just curious because this species isn't normally found in California. It's native to the Gulf States. Would be pretty interesting if it's become established in CA, too!