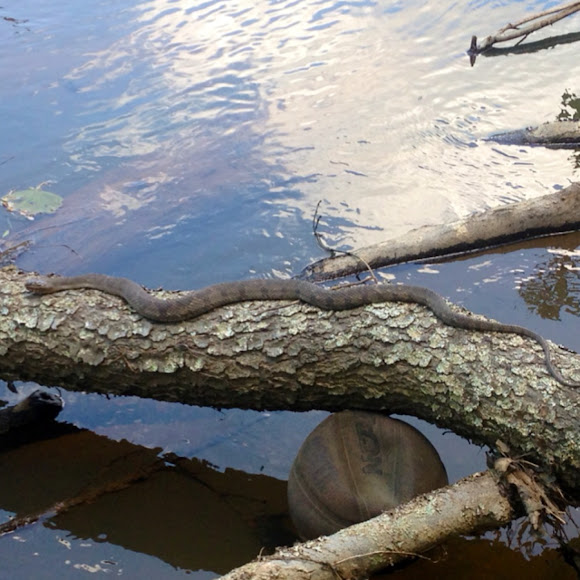 Brown Watersnakes are large -- 30-60 in (76-152 cm) –- fairly heavy-bodied semi-aquatic snakes. Coloration is generally light to dark brown with large dark brown square blotches. One line of square blotches runs down center of the dorsum and two other lines run in alternating rows along the sides of the body. The belly is usually light with brown splotches and black crescents. Like all natricine watersnakes, brown watersnakes have strongly keeled scales; anal plate divided; head visibly wider than neck, giving it a slightly triangular appearance. Brown watersnakes have narrower heads than other watersnakes in our region. Additionally, the eyes are high on the head and close to the tip of the nose. Females are much larger than males.

The brown watersnake is widely-distributed in the Coastal Plain and Piedmont regions of the Southeast from southern Virginia south through all of Florida. West of eastern Alabama this species is replaced by the closely-related diamondback watersnake (Nerodia rhombifer). Brown watersnakes are found throughout Georgia and South Carolina with the exception of mountainous regions of extreme northwestern South Carolina and northern Georgia. Although they may be found in a variety of aquatic habitats, they are most common in flowing water such as rivers, canals, and blackwater cypress creeks. While other watersnakes in our region (banded and red-bellied) are frequently found in temporary wetlands and ditches, the brown watersnake's preference for fish as prey makes them largely restricted to permanent water bodies, including large reservoirs. Additionally, they travel less over land than other watersnakes and are seldom observed far from the water's edge. Ideal habitat includes abundant overhanging vegetation, emergent snags, or rocky river banks where snakes may bask.