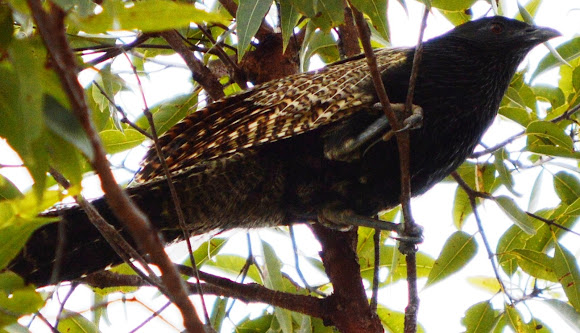 The Pheasant Coucal is a member of the cuckoo family of birds but resembles a pheasant more in appearance, and does not parasitise the nests of other birds. Dark almost black colouring with barring in shades of brown and cream give the birds a unique appearance during breeding season. Out of breeding season they revert back to the paler form with more chestnut coloured feathers but still retaining the barred appearance. They eyes are red. Females and males look similar although females appear slightly larger. Juveniles are a paler version of the adults often with a more 'spiky' look to the head feathers. Not a great flyer Pheasant Coucals prefer low vegetation and often resemble a reptile as they skulk low through undergrowth. The call is a low booming sound repeated and rising and falling rapidly, females usually deeper in tone. Feeds on insects, small mammals, reptiles, vegetation, berries.

Found throughout northern and eastern Australia including in New Guinea and East Timor. Prefers low vegetation with plentiful opportunities to hide among the dense grasses and low shrubs.

Thanks Tom15. Had hoped to get a better shot, but I only got one as the bird was quite nervous and flew (crashed clumsily) through the tree branches, the Noisy Miners were chasing it as they are very territorial.