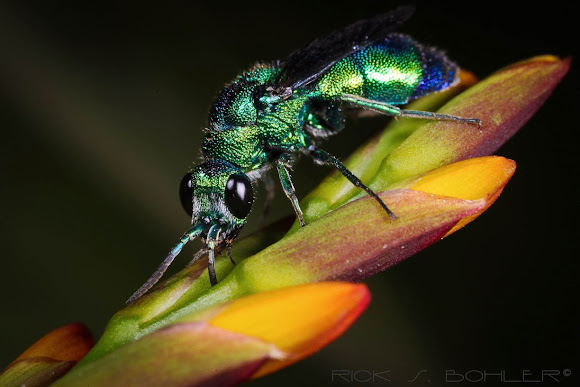 A cuckoo wasp is one of those remarkable animals that appears for just a few seconds and makes you wonder what the heck you just saw. Fast-moving and no larger than a skinny housefly, these wasps stand out nonetheless: They glow an outrageous iridescent blue-green, as if illuminated from within. Cuckoo wasps pack a lot of drama into their tiny bodies. Their color is part of the mystery. These wasps are parasites, and like their namesake cuckoo birds, they lay their eggs in the nests of other species (wasps or bees in this case). Since the cuckoo wasps depend on trickery and camouflage to fool their hosts, you might expect them to be drab. Scientists have not figured out whether the bright colors serve any function, and it wasn't known until 2009 that the color is actually produced by light refracting through open spaces between six layers of cuticle in the wasps’ exoskeletons.

Cuckoo wasps favor warm Mediterranean climates, and California is a center of cuckoo wasp biodiversity in North America. They are most active in dry, open areas between May and August, with adults foraging on flower nectar as they follow favored routes multiple times a day searching for solitary wasps and bees to parasitize.

Cuckoo wasps might duck their parental responsibilities, but it’s not exactly an easy living. Cuckoo wasps that parasitize ground-nesting bees and wasps must somehow slip their eggs into an underground burrow without being detected. They first find bees and wasps that are in the process of digging burrows and dragging paralyzed prey into their nests as food for their own young. Female cuckoo wasps then hide nearby to watch the burrow and either try to hitch a ride on the paralyzed prey as it’s being dragged into the burrow or else wait until the host flies off and then slip inside.

Thanks for all the compliments Gilma

Thanks Maria and Mona :)