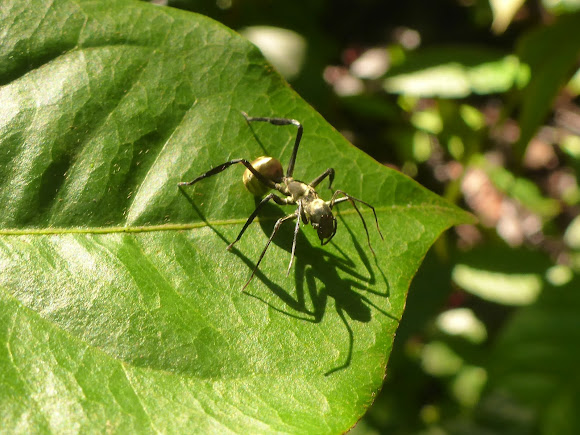 This is a perfect example of ant mimicry, I dind't realize it was a spider until I was editing the pictures for this post. The shadow on the first pic looked like a spider and made me realize what I was looking at. One of the most beautiful and interesting animals i've hade the pleasure to find. Wikipedia: M. rettenmeyeri has a strange longitudinal band of black hairs extending along the midline of the cephalothorax. This seems to enhance the resemblance to the ant Camponotus sericeiventris with which it shares the same habitat. The crests of black hairs correspond to the solid longitudinal keel-like dorsal extensions of the posterior sections of the ant's thorax.M. rettenmeyeri is named after entomologist Carl W. Rettenmeyer, who researched ants.

Sometimes you just take a shot at some very common insects just because of the setting or the light. I just loved how this ant looked with the 7:00 am light. Then I was looking at the first picture and thinking it looks like the ant is watching it's shadow because it looks like a spider. Upon a closer look I realized this wasn't a golden carpenter ant but one of the most beautiful ant mimics I have ever seen. Enjoy! I dont know this species but to me (geologist) it certainly looks like a Golden Carpenter ant mimic spider.

I was wondering if it would be possible to use these photos as part of a study? We're researching ant mimicry in spiders at Macquarie University and are looking for images of this species for it. Please let me know how you would like to be credited, and if you have questions please email me at zoe.wild@mq.edu.au.

By the way, with mimicry normally you see an important difference in movement of the species but I was completely fooled by this guy, not even the movements seemed different at the time.

Thanks, I also though I was getting a pic of an ant. There were many Camponotus near the site of the picture. It wasn't until I was getting the shoots ready for the post that I realized what beauty I had in front of me. It is a perfect mimic so perfect that it even fooled Bayucca! ;)

With the crops I also see the chelicerae and the eyes as well, not only the legs ;-)...

Perfect mimic of a Camponotus sericeiventris!! Congrats! It IS a spider not an ant! Shame on me...

I believe this is a spider. I did need to see the zoom of the face though. What an amazing mimic!

Hahaha, I added some crops (not too sharp...). Please note the antennae are not in the same place as in Camponotus. I think those are the front legs.

OK, for me it is already too late. If everybody thinks it is a spider, I will delete my suggestions tomorrow, I do not want to be the only fool who thinks it is an ant ;-)...

Wait, Bayucca, so you are saying it is an ant?? look at the antennae and the eyes. I really feel this is a mimic spider.