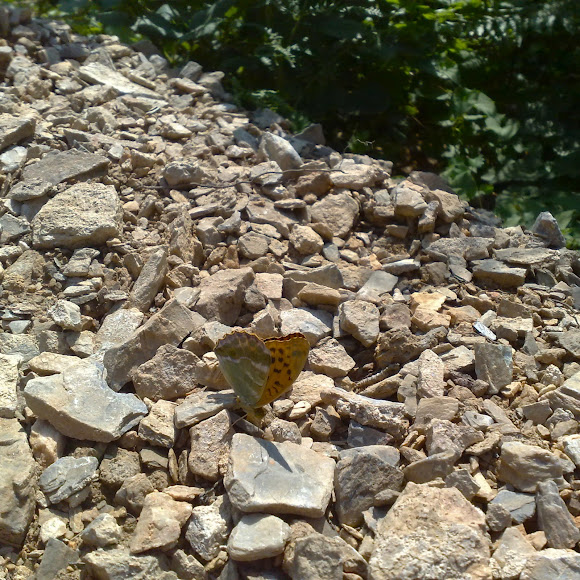 The Silver-washed Fritillary (Argynnis paphia) was in decline in the UK for much of the 1970s and 1980s, but seems to be coming back to many of its old territories. The Silver-washed fritillary butterfly is deep orange with black spots on the upper side of its wings, and has a wingspan of 54–70 mm, with the male being smaller and paler than the female. The underside is green, and, unlike other fritillaries, has silver streaks instead of silver spots, hence the name silver-washed. The caterpillar is black-brown with two yellow lines along its back and long reddish-brown spines. Adults feed on the nectar of bramble, thistles, and knapweeds, and also on aphid honeydew. The silver-washed is a strong flier, and more mobile than other fritillaries, and, as such, can be seen gliding above the tree canopy at high speed. Its preferred habitat is thin, sunny, deciduous woodland, especially oaks, but it has been known to live in coniferous woodland. The male possesses scent scales on the upper side of the forewing that run along veins one to four. The scent produced from these scales attracts females and helps to distinguish it from other species. Unusually for a butterfly, the female does not lay her eggs on the leaves or stem of the caterpillar's food source (in this case violets), but instead one or two meters above the woodland floor in the crevices of tree bark close to clumps of violets. When the egg hatches in August, the caterpillar immediately goes into hibernation until spring. Upon awakening, it will drop to the ground, and feeds on violets close to the base of the tree. The caterpillar usually feeds at night, and usually conceals itself during the day away from its food source, but during cool weather will bask in the sunny spots on the forest floor on dry, dead leaves. It will make its chrysalis amongst the ground vegetation, and the adults will emerge in June. The main larval food plant of the species is the common dog violet Viola riviniana.

Argynnis paphia is a common and variable butterfly found over much of the Palaearctic ecozone – Algeria, Europe, temperate Asia and Japan.