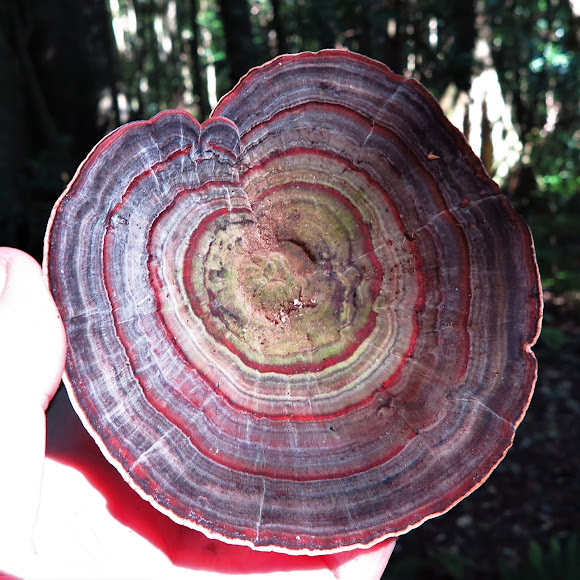 Microporus affinis, commonly known as "dark-footed tinypore", is a fungus species in the family Polyporaceae. I found these beautiful specimens on a large, decaying tree branch. This fan-shaped bracket has a velvety/satin-like, ridged cap with concentric zones of various colours including brown, red, yellow, green, blue and black, and with a fine white margin. The lower surface is white and finely pored, and from what I've read, the spore print is also white. Distinctive characteristics for this species are the saucer-shaped depression in the cap near the stem (aka stipe), and the very short lateral stem which expands at the base to form a dark ‘foot’. However, the large specimen I found had a pronounced central stem (last photo) which I think is unusual for this species. Probably 20-30 brackets growing on this large branch. NB: The specimen that I'm holding was found on the forest floor - it had already been dislodged from the branch. Lucky for me because it was a beautiful specimen, and quite a decent size too. The shifting light from full shade to direct sunlight had an amazing effect as the colours were so changeable. Sunlight definitely highlighted the satin-like quality of the brackets, whereas the colours seemed to be enhanced with softer, filtered light or full shade. Anyway, that's what I see. (also see notes).

Spotted on the Mt. Mathieson Trail in a section of subtropical rainforest at Mt. Mathieson, Spicers Gap. This area is part of Main Range National Park, and the Gondwana Rainforests of Australia World Heritage Area. It is a widespread polypore that is common in tropical and subtropical regions of both the northern and southern Hemispheres, and in Australia, is found mainly in rainforests from northern Queensland to southern NSW.

Here's another spotting I made a few months earlier of Microporus affinis at D'Aguilar National Park, just a short distance from Brisbane. The colours are magnificent, but definitely not as velvety as this spotting - https://www.projectnoah.org/spottings/15... Also a good link to Queensland Mycological Society with more detailed information and photos - http://qldfungi.org.au/wp-content/upload...

This was an amazing spotting. I recall the "wow" factor when I saw the beautiful velvet blue in dappled sunlight. It's a lovely section of rainforest too.

Amazing Neil. How did I miss this.

They are magnificent. Did you see the link to my other spotting? Different colours yet again, under different light. I'm glad you like :)

COOL, Neil!! Those colors are STUNNING!!!

Thanks, Zlatan. Did you see the link in the notes? Different colours. Congrats on your spotting of the day too :)

Thanks, Dawn. I was lucky to spot them. The tree was a fair way off the track, but worth the effort to investigate.

That is a very pretty find! Thank you for sharing!

Thank you. It was a beautiful specimen, and yes, unusual. I recall it being almost dish-like, and the foot almost central. Other specimens had the more traditional bracket shape.

gorgeous, seems uncommon to find a shelf fungus that lifts itself into an almost traditional mushroom shape.