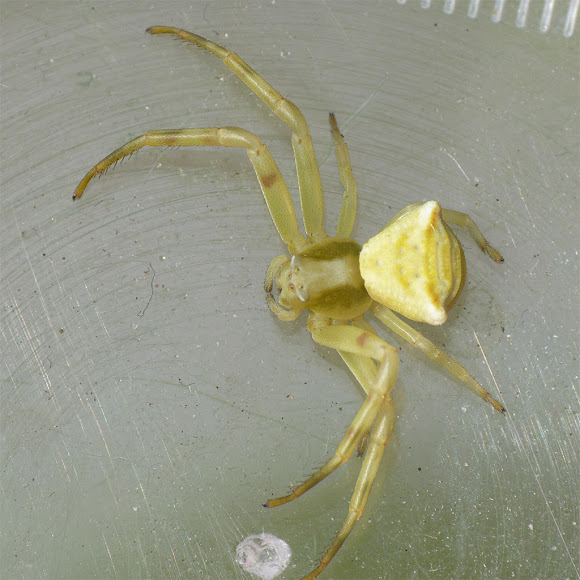 SIZE: ♀ 7,0-9,8 mm - ♂ 2,0-3,6 mm
This species is characterized by the prominent rear corners of the opisthosoma.
In males the basic colour of the prosoma varies from yellow brown to dark brown, the opisthosoma may be yellow and green or brown. Also females are very variable in colour, their basic colour can be white, yellow or pink.
As a matter of fact these crab-spiders hide themselves adapting the colour of their body to the colour of the flowers on which they are waiting for preys, a behaviour that conceal them from predators and from the pollinating preys.

These spiders prefer warm temperatures, forest-free areas, dry and sandy habitats with high solar radiation and dry grasslands.
DISTRIBUTION: It has a Palearctic distribution from Great Britain and Portugal in the West to Japan in the East. It is present in most countries of Europe, but it is absent in Iceland, Ireland, Norway, Denmark and Finland. North-south distribution extends from Sweden to South Africa and from Siberia to Central Java, including temperate and tropical ecozone.

In Germany it's listed in the Red List as "endangered" (RL 3) - for some regions even as "threatened by extinction" (RL 1 - e.g. Berlin).

The first and until yesterday last time we found one was in 2010 -> http://www.projectnoah.org/spottings/298... .
This lady was extremely shy, always trying to hide from me, that's why I put her in a cup for a little while ;)