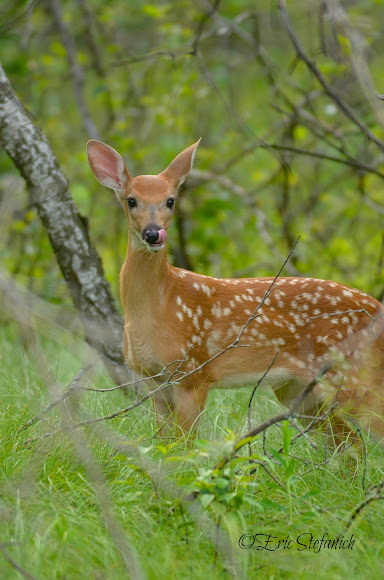 The White-tailed Deer is distinguished from the Mule Deer by the smaller size of its ears, the color of its tail, and most strikingly, by antler shape. In Whitetails, the main beam of the antlers grows forward rather than upwards, and each tine develops as its own separate branch rather than being split into a forked pair. The two species also run differently when they are alarmed. Mule Deer stot, a boing-boing-boing motion in which all four feet leave and hit the ground with each bound, whereas White-tailed Deer spring forward, pushing off with their hind legs and landing on their front feet.

Today White-tails are very widespread in North America: there may be as many as 15 million in the United States. These Deer are adaptable browsers, feeding on leaves, twigs, shoots, acorns, berries, and seeds, and they also graze on grasses and herbs. In areas where they live alongside Mule Deer, the species naturally separate ecologically, the Whitetails staying closer to moist streams and bottomlands, the Mule Deer preferring drier, upland places.