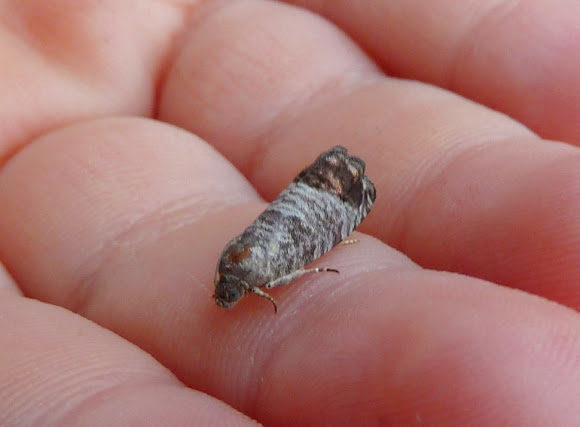 They are known as an agricultural pest, their larva being the common apple worm or maggot. It also attacks pears, walnuts, and other tree fruits. The codling moth is greyish with light grey and copper stripes on its wings, and has an average wingspan of 17 mm. The females lay eggs on fruit or leaves and the black-headed yellow larvae attack the fruit immediately upon hatching. Each larva burrows into the fruit, eats for around three weeks, then leaves the fruit to overwinter and pupate elsewhere. My lovely little niece found this moth and it was carrying it around for more than an h! Poor moth I think it was scared to dead to move and become squeezed paste! Happy ending though, poor moth happily escaped and flew away in the garden ;)

It is native to Europe and was introduced to North America, where it has become one of the regular pests of apple orchards. It is found almost worldwide.

Thank you Jakubko ;) btw my niece (6) is somehow attracted to everything that looks scary and that will get a disapproval answer from her parents :D like jellyfishes and spiders-she constantly care them...I mean they do bite, I told her once, look they are gonna bite you, she said: yes I know, they already did :D I guess that's the spirit of a future Noah member :P

Great story! I love stories about fascination with moths. Here is my reference link: http://bugguide.net/node/view/521679
Yes, I know the moth in the link is from New Mexico, but it was introduced from Europe.