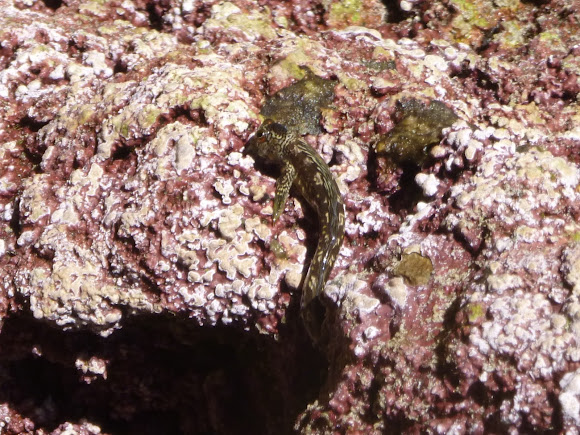 About 7-9cm long slender rockskipper. Overall dark grey-green body colouration with fawn-coloured regulary markings along their sides. Great deal of variation in markings but some are in an almost geometric pattern, whilst photo 1 shows less fawn markings and some small light green coloured spot. Similar colouration but in a more 'brain like pattern' extends down the pectoral fins and visible on the top of the head. Some individuals had a dark coloured patch on the top of their head as well. Comparatively long pectoral fins, which would extend to the front of the head. Head is not significantly larger than the anterior portion of the body and eyes are raised at approximately 45degrees from the top of the head. Unfortunately I didn't manage to get a photo with the raised dorsal fin, which would have further assisted ID.

Rockskipper seen on the wet rock faces on the west coast of Niue. Very fast moving and living out of the water - many scuttle up into rock crevasses when approached.

It wasn't until I came to ID these creatures, thinking they were mudskippers that I ran into difficulty. Gianluca Polgar, a mudskipper expert I found on line, pointed out they were probably rockskippers. Although these are not listed as rare or endangered, information on line is very limited. I would love to find out more information about them. Niue is such an 'undiscovered' and undocumented island, it wouldn't be impossible that these little guys have not been noticed for what they are. Although identified as occurring in the pacific, Niue is not mentioned among the islands where they are found. I would love to know if, at the very least this is may be a confirmed extension to the known rockskipper range and possible a new speices/sub-species, especially due to the habitat. I have located the sighting as centre of Niue for the time being

Hi Antonio, Maria and Mark - apologies for the lateness in replying - thanks for your comments. I have learnt a lot about this researching for PN - it has been fascinating!

Thanks Zlatan and thanks Daniele for the nomination and assistance with identification. Niue is just the most amazing place with very little documentation of species and subspecies. I'm definitely hoping to go back to get a better look at these little guys and see what else is around. I am sure there could be some real gems waiting to be found.....

wow. Great spottings, and great notes. Congrats, and thanks for al efforts in researching these and sharing.

Congratulation Rachel, your rockskippers are our Spotting of the Week!
I've left the ID somehow open in the announcement as to encourage people to come forward confirming it or making alternative suggestions.

"Our Spotting of the Week is somewhat of a mystery! Project Noah member remkinloch originally thought those fish were mudskippers (family Gobiidae, subfamily Oxudercinae). However a mudskipper expert sought out online indicated they were likely to be rockskippers (family Blenniidae). Rockskippers occupy rock pools which they skip and jump over; they feed from algae scraped from the surface of dead corals. The nearest matching rockskipper species for fish in this image seems to be the Rippled Rockskipper (Istiblennius edentulus), a widespread Indo-Pacific blenny somehow variable in appearance. Still, it is not yet described to small island of Niue where the spotting was made. This tiny island is one of the largest raised coral atolls in the world, yet there is a gaping lack of documentation about its wildlife. Can you help with identification?"

Thanks for your time and effort on research - I have updated the spotting as per your comments. I did a lot of looking on line and at one time thought, as you point out, that they may have been as identified above but then some of the images on line were very confusing and contradictory and I felt I was going round in circles..... Appreciate the help!

Hi Rachel! Doing some further research on this it would seem these are Rippled Rockskippers (Istiblennius edentulus). Looking it up further I noticed that you have come to the same conclusion as you left this comment on whatsthatfish.com:
https://www.whatsthatfish.com/fish/rippl...
Should the spotting be updated?

Your spotting has been nominated for the Spotting of the Week. The winner will be chosen by the Project Noah Rangers based on a combination of factors including: uniqueness of the shot, status of the organism (for example, rare or endangered), quality of the information provided in the habitat and description sections. There is a subjective element, of course; the spotting with the highest number of Ranger votes is chosen. Congratulations on being nominated Rachel!