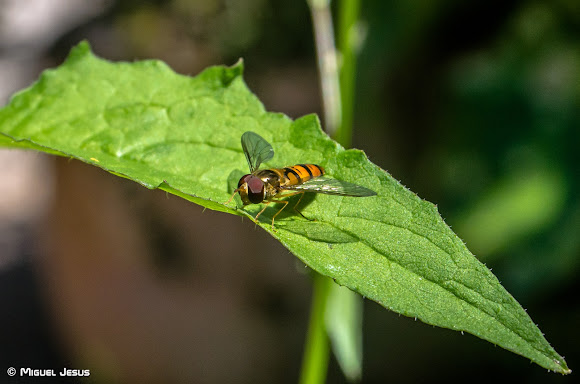 This beautiful small hoverfly (9–12 mm) of the Syrphidae family, was flying from plant to plant on my garden. Its ability to rover (its head remains absolutely still whilst in flight), amazed me, so did its colors. Like most other hoverflies, it mimics a much more dangerous insect, the solitary wasp, though it is a quite harmless species. This phenomena is called an aposematism and it's an antipredator adaptation. To look like a wasp, gives them some level of protection against predators. The upper side of the abdomen is patterned with orange and black bands. Two further identification characters are the presence of secondary black bands on the 3rd and 4th dorsal plates and of faint greyish longitudinal stripes on the thorax. As in most other hoverflies, males (like this one), can be easily identified by their holoptic eyes (left and right compound eyes touching at the top of the head).