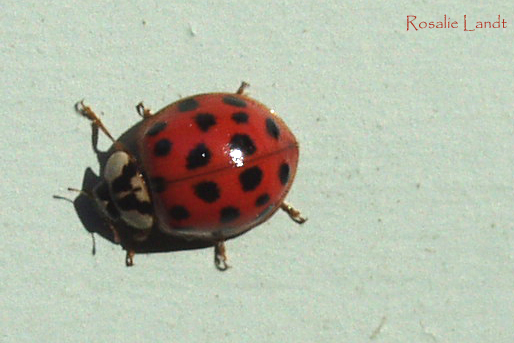 Coccinellidae are a family of beetles belonging to the superfamily Cucujoidea, which in turn belongs to the series Cucujiformia within the suborder Polyphaga of the beetles (Coleoptera). Their relatives within the Cucujoidea are the Endomychidae ("handsome fungus beetles") and Corylophidae ("minute fungus beetles"). Worldwide, nearly 6,000 species of ladybirds are known, of which 98 are currently reported to occur in Florida (Table 1). Some of these 98 are considered to be native, and others to be adventive ("having arrived from somewhere else and established feral populations"). Among the adventive species, some were introduced (introduced deliberately), and others are immigrants (having arrived by any means except deliberate introduction) (Frank & McCoy 1990). Ladybird adults are oval, range in length from about 1 mm to over 10 mm depending upon species, and have wings. Females on average are larger than males. Adults of some species are brightly colored. Their mandibles are used for chewing. Adult ladybirds are able to reflex-bleed from the tibio-femoral articulations (leg joints). The blood (hemolymph) is repellent by having a repulsive smell as well as containing (in some species) various alkaloid toxins (adaline, coccinelline, exochomine, hippodamine, etc.). The hemolymph is yellow and its repellency and toxicity are believed to be a defense mechanism against predators. Some people have claimed that the bright (red on black, or black on red) colors of some adult ladybirds are aposematic, which is to say that the colors warn would-be predators that the beetles are distasteful or toxic.

Ladybird eggs produce larvae that undergo four instars before pupating, metamorphosing, and giving rise to adults. So far as is known, all the Florida species have this typical life cycle. Typically, ladybirds have several generations each year, and reproduction is slowed or halted by cooler winter weather, when adults may hibernate. In Florida, adults and larvae of 75 species feed on scale insects (in the broad sense, see below), and only 13 feed primarily on aphids. As pointed out by Dixon (2000), there are typical differences in behavior between these trophic groups. Those that feed on aphids develop faster, age faster, move faster, typically are larger, and lay their eggs in clusters. Those that feed on scale insects develop more slowly, live longer, move more slowly, typically are smaller, and lay their eggs singly.

There are four different ladybugs in the series above, all taken the same day on the side of a wood shed. Tan, Red and Orange, no spots and many spots. I do not know which species each are but find it interesting to have seen such differences with them together.

Hi Rosalie, nice spotting!
All of the Lady Beetles in your spotting are the same species. Harmonia axyridis or the Multicolored Asian Lady Beetle is quite variable in pattern and color. This species was introduced to North America for natural pest control. They are quite invasive and prolific. They also spread disease to native species of Lady Beetles.

Here is another link:
http://bugguide.net/node/view/397